”Bush may turn out to be the worst president in history,” W. director Oliver Stone has told Entertainment Weekly . ”I think history is going to be very tough on him. But that doesn’t mean he isn’t a great story. 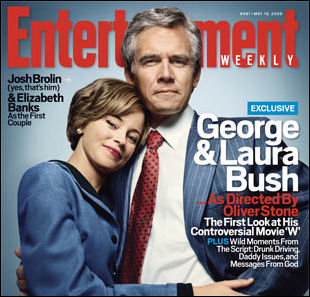 “It’s almost Capra-esque, the story of a guy who had very limited talents in life, except for the ability to sell himself. The fact that he had to overcome the shadow of his father and the weight of his family name — you have to admire his tenacity. There’s almost an Andy Griffith quality to him, from A Face in the Crowd. If Fitzgerald were alive today, he might be writing about him. He’s sort of a reverse Gatsby.”
Again, my reactions to Stanley Weiser‘s fine script.