It’s a little weird for a film to have a title that’s a question (like Quo Vadis?) but spelled without a question mark. Cieply leaves off the question mark, and so does a draft of Brooks’ script that I’ve had on on my desktop since last August. Remember Tom Hanks “there’s no crying in baseball!” line in A League of Their Own? Well, you can’t leave off question marks at the end of a question, movie title or not…kapeesh?

No, I haven’t read the script. Okay, I’ve read 35 pages or so. I didn’t finish out of concern that reading Brooks’ well-honed dialogue might ruin my enjoyment of the finished film. But I can share one thing — Wilson’s Manny has clearly been conceived on the page as a superficially likable but chauvinistic ego-jock in the Tiger Woods vein.

“How Do You Know started…five years ago, when Mr. Brooks…became fixed on the notion of making a film about a young female athlete,” Cieply writes. “Not untypically, he spent hundreds of hours interviewing women who excelled in various sports before settling on softball as good cinematic turf, according to people who worked on How Do You Know and spoke on condition of anonymity to avoid conflict with studio executives and others.

“The plot is rooted in an encounter between two people who meet on the worst night of their respective lives.

“Early on, Mr. Brooks became convinced that only Ms. Witherspoon could play his lead character, Lisa Jorgenson, who, at 27, is just past her sporting prime. Fortunately Ms. Witherspoon shared his conviction: she spent a year doing three-hour daily workouts to prepare for the role. 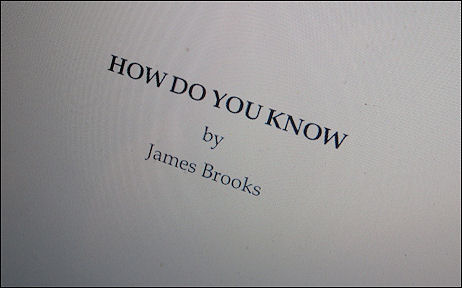 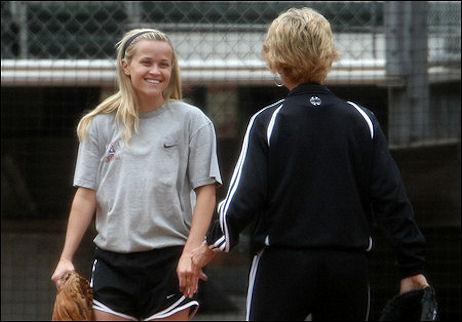 “Along the way Mr. Brooks became fascinated by the dilemmas of contemporary business executives, who are sometimes held accountable by the law for corporate behavior of which they may not even be aware. This brought new research into the lives of people who run companies, work for the Justice Department, or, in at least one case, have spent time in jail.

“From that slowly cooked stew came two new characters, one of whom is now played by Mr. Rudd, the other by Jack Nicholson — a Brooks regular who took the role only after Bill Murray, the first choice, declined.

“Mr. Brooks, famously private, disclosed little about the project, which was widely described in news reports as a romantic comedy set in the world of baseball. But the sport only occasionally figures in a film that is actually about people trying to figure out exactly what, for each of them, matters most.

“Mr. Brooks began shooting last summer in Washington and Philadelphia with a team of producers that includes Julie Ansell, who is the president for motion pictures of his Gracie Films; Laurence Mark, who was recently a producer of Julie & Julia and worked with him on As Good as It Gets and other movies; and Paula Weinstein, a film veteran whose credits include Blood Diamond.” 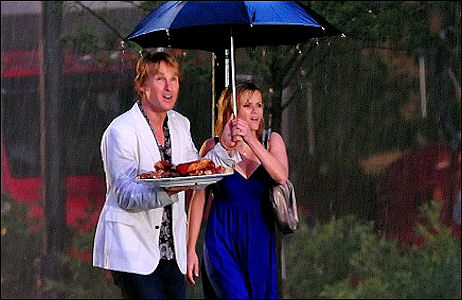