According to this Slashfillm posting that went up Friday night, a clueless Ben Affleck was recently fooled by Sacha Baron Cohen during filming of Bruno. Or so claimed National Enquirer gossip Mike Walker during last Thursday’s Howard Stern show. Forget the Affleck b.s. — how can Cohen get away with this routine with anyone? What 30 year civil servant on the edge of retirement isn’t in on the joke? 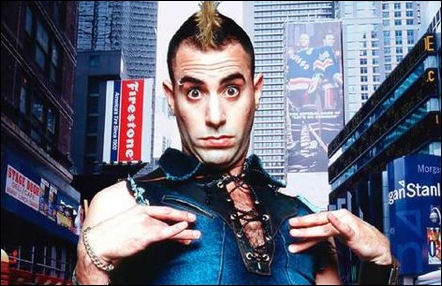 Affleck allegedly called Sarah Silverman “after doing a sit-down interview with a person he was told was a ‘very famous openly gay fashion journalist,'” blah, blah. “Affleck called the interview ‘the weirdest sit-down he’s ever had with a reporter’ explaining that the interviewer’s (whom he refered to as an ‘idiot’) first question was ‘how do you like niggers?‘ After a stunned silence, Silverman asked Affleck, ‘Was this guy’s name Bruno?’ Then and only then did Affleck actually realize that the whole thing was a gag.'”
This You Tube clip of Cohen recently filming at the Wichita, Kansas, airport isn’t bad, however. Here’s a story about what happened there. Here‘s another one.