John Lee Hancock‘s The Blind Side “is the kind of inspiring and solid upbeat studio release that could, and should, put Sandra Bullock firmly in the race for Best actress,” Envelope/Notes on a Season columnist Pete Hammond posted this afternoon. 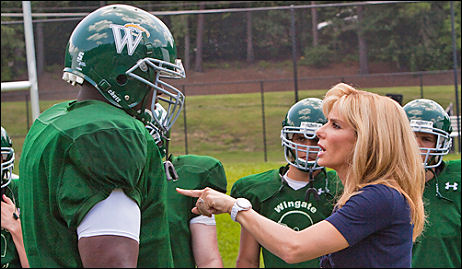 “This could be her Erin Brockovich. Just like the film that earned Julia Roberts her Oscar, this is a true-life story about Leigh Anne Tuohy, an unstoppable force of nature who persuades her very white Southern family to take in a virtually homeless African American teen named Michael Oher (played by newcomer Quinton Aaron). This unusual adoption leads to a brand-new life for the boy and sends him on his way to eventually becoming an All-American football star.

“Aaron and the rest of the cast, which includes Tim McGraw and Kathy Bates, are just fine. But it’s Bullock, burning up the screen as an upscale Southern woman who finds her heart and soul, who should finally earn some awards attention. It’s easily her best screen work since her underrated supporting turn in Crash.”