9:56 pm Pacific: It’s over. Hillary Clinton, who has lost fair and square, needs to concede — everyone needs to turn off their TVs and take long walks or maybe hit the nearest bar, so she just needs to man up and face the music. She isn’t making things better by stalling. She needs to concede and announce that a bigot, a hatemonger and a guy with an ADD condition that would choke a horse will be sworn in as President on 1.20.17. It’s 1 am in New York. This country just elected an intemperate child, a grotesque clown, to lead the country for the next four years. Ingmar Bergman‘s Shame. The ghost of John F. Kennedy is disgusted. Abraham Lincoln isn’t even reachable.

Nate Silver at 9:50 pm Eastern: “It’s very hard for Clinton to win the Electoral College if she loses Michigan along with Ohio, North Carolina and Florida, none of which look particularly safe for her right now. Even if she were to hold the test of her firewall and win Nevada, she’d be stuck at 263 electoral votes and would need to do something unexpected like flip Arizona or Georgia into her column.”

Nate Silver forecast bot (10:12 pm Eastern): “Clinton wins New Mexico. Our model now gives her a 60% chance of winning the election.” Bullshit! I just took a percocet. Hillary Clinton has been a lousy candidate all along, and now, God help us, the chickens have come home to roost. Thank you, Jill Stein and Gary Johnson supporters. Michael Moore‘s Michigan will go for Trump, and that’s all she wrote. 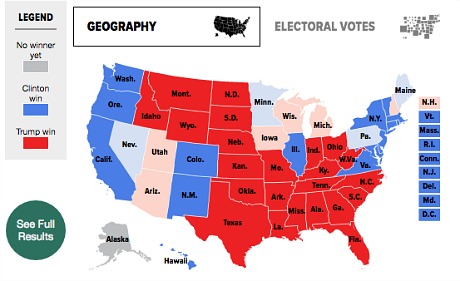 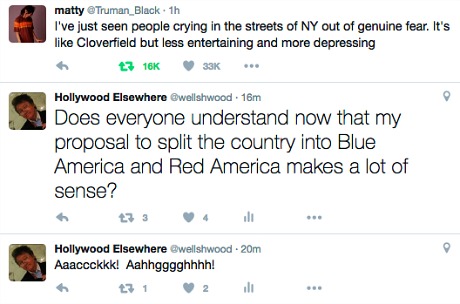 7:42 pm news bulletin: A friend who’s been a hardcore Hillary supporter all along just told me she thinks I’m partly responsible for Clinton’s loss (because I said she’s unappealing as a candidate with the braying and the eye bags), and so she just told me we’re done as friends. Brilliant!

Earlier: Things are looking very tight, and I for one am white-knuckle terrified. Democrats are very nervous. Trump is going to win Florida and quite possibly North Carolina. The bumblefucks are heavily motivated. I’ve been saying all along that my seat-of-the-pants intuition was telling me that Hillary Clinton will squeak through to a victory, but only by a little-mouse squeak. 7:15 pm update: I’m getting a very bad feeling right now — very bad. A reality TV star and an ADD-afflicted demagogue is going occupy the White House.

The hinterland dumbfucks are a lot stronger than anyone figured. If Hillary doesn’t win Florida (and she won’t), it’ll makes HRC’s path to victory a lot tougher. I can’t believe this. A warm-nostril-breath psychopath may actually become President. Not likely but not unlikely either. Terrifying. The Young Turks‘ Cenk Uygur is the prophet. Nate Silver, from whom I drew endless comfort during the campaign, has some splainin’ to do.