Steven Spielberg has made a highly respectable grandfather-clock film that has inspired subdued or muffled reactions from one-third of the industry/journo crowd, so naturally Movieline has him down as the Best Director front-runner. Ang Lee is the winner of the 2013 Attaboy Award for having directed a respected, vaguely spiritual tiger-in-a-lifeboat film that has absolutely no chance of winning the Best Picture Oscar, so it makes perfect sense that he’s ranked above David O. Russell, director-writer of easily the smartest and most skilllful “up” film of the year….yeah! 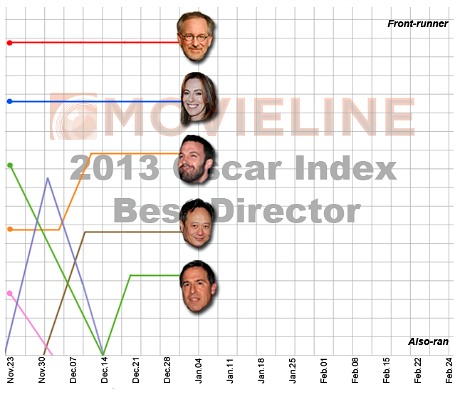 I don’t want to hear one single comment about my Lincoln-Spielberg views. I realize I’ve made them perfectly clear, but Movieline‘s Donald Liebenson has put up his latest Oscar Index and it says what it says. I can’t sit mum on the sidelines because four or five HE readers might say “enough already.” The season’s the season, and it ain’t over ’til it’s over.