An American Pavillion panel discussion about “Buzz Builders,” sponsored by Skype, concluded about 90 minutes ago. Alex Ben Block moderated with Variety‘s Mike Jones, IFC.com’s Alison Willmore and Indiewire‘s Eugene Hernandez participated along with MCN’s David Poland on a live video hook-up. A few interesting subjects were tossed around, including a speculation by Poland that the Hollywood Reporter may be toast in three years’ time.

Hernandez took a bow for delivering extremely fast coverage of festival news and events, such as posting about this morning’s Jack Black/Kung Fu Panda stunt 30 minutes after it ended.
Block asked the panelists where they stood on respecting review embargos, the between-the-lines implication being that internet bloggers have a rep for playing fast and loose on this score.
In the q & a portion I brought up the fact that a N.Y. Daily News feature writer recently jumped the embargo by running a sweetheart review of Sex in the City and nobody said boo, but if an online columnist had done the same the c.w. would have been “there goes the internet again, being untrustworthy.” I voiced doubts about New Line/HBO allegedly being surprised by the NYDN review. Poland voiced a belief that that “of course” they okayed it in advance, adding (a) that this is nothing new and (b) that both he and I have run similar-type friendly reviews in advance of embargo dates.
Poland said that the difference between print and online film writing is a “lack of editing” and seasoned judgment. He mentioned a propensity on the part of the former to emphasize (or certainly allow for) “personality journalism” a la Nikki Finke‘s Deadline Hollywood Daily. (As well as — let’s be candid — yours truly.) Jones added that “some” of the online reporting about the WGA strike (he didn’t mention Finke by name but this seemed the implication) was “wrong…a lot of screenwriters lived through these reports and got their hopes up.” 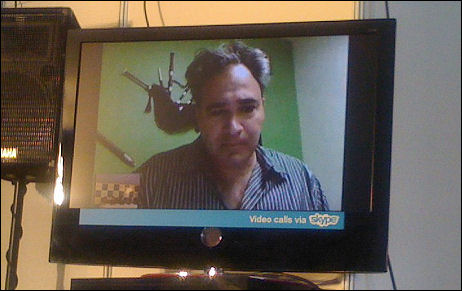 Poland lambasted the N.Y. Times for running a recent Michael Cieply story about Indiana Jones and the Kingdom of the Crustal Skull suffering bad internet buzz, which he said was a non-story. And yet the exhibition word on the film is real, I contend, having been told myself by a trusted source about a negative reaction from a Southern-based exhibitor, and also having heard loose talk along these lines from an industry source whom I’ve known for several years.
Both Hernandez and Jones mentioned the importance of judgment and “context” in the reporting of news stories. Jones particularly referred to Anne Thompson‘s Variety reporting about Warner Bros.’ decision to kill Picturehouse and Warner Independent as a fine example of such standards.
I mentioned later that although Thompson’s seasoned understanding of the business makes her a first-rate reporter and analyst, the fact remains is that Defamer‘s Stu Van Airsdale was more correct in his piece about the imminent demise of Picturehouse than Thompson was in her subsequent article which said that Picturehouse’s Bob Berney and W.I.’s Polly Cohen were “likely” going to share the running of a merged operation. My point was that you need to read everyone and consider everything.
Poland said that Warner Bros. simply changed its mind about keeping Picturehouse/W.I. at the last minute, although a reliable-sounding report has been published saying that the decision to whack the two companies was made about a week before it was announced.
Poland said later that an online hurdle thus far is that “there’s no money” in blogging for many if not most writers who toil in this medium. Or at least, “not enough to live on.” And yet “having a seat at the table” is what everyone wants, he said, including the N.Y. Times.
He also said he “would be very surprised if The Hollywood Reporter is still [around] three years from now.” (I think he meant in its present form, but maybe not.) Poland posted a Hot Blog column a year or two ago about how THR needs to get with the program and become a big-time online trade site, and that he would be a good choice to manage this transition and maintain it thereafter, or words to this effect.