One of the two photos in the Glass Onion press release is a shot of director-writer Johnson and Monae. Which suggests that Monae, Craig aside, has the lead protagonist role. Which means she’s probably playing an equivalent of the Ana de Armas role in the original Knives Out — a pure of heart, relatively innocent, non-white woman up against a demimonde of scurvy, slimy skunks and serpents.

Norton, I’m guessing, has the Chris Plummer role, except given Glass Onion‘s Mediterranean vacation vibe…well, let’s just use our imagination and presume that Norton’s character is at least partly inspired by the cruel, manipulative James Coburn character in The Last of Sheila. Or something in this vein. Why hire the rapscallion Norton if you don’t want him to play edgy and a tiny bit wicked? 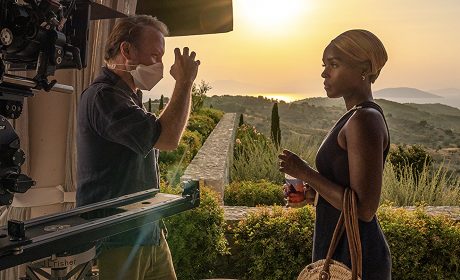 Sheila, which played with the same kind of Agatha Christie “whodnit?” formula that the Knives Out films are modelled upon, was shot along the French Cote d’Azur.

Which reminds me: how come Johnson and his producers chose Spetses for their Greek location when Maggie Gyllennhaal and Olivia Colman‘s The Lost Daughter shot there only a couple of years before? Of all the hundreds of exotic Greek island locations they chose the same damn island?

Netflix paid $468 million for rights to both Knives Out sequels, but the actual production budget (per Wiki) was only a little more than $40 million with over $100 million in fees paid to Johnson, Daniel Craig and producer Ram Bergman for their work on both productions. (Nice payday!) That totals out to $140 million and change, maybe a bit more. Call it $150 million.

That leaves roughly $318 million in expenditures for the second sequel. What is Johnson going to shoot in that second sequel? Will he sink a 300-foot yacht a la Titanic and then stage a battle between the cast and the Kraken from Clash of the Titans?

Sorry but I’m only going by the numbers in the Wiki page.

The $468 million paid by Netflix (a result of a bidding war) is humungous, historic. Last year a well-placed source told Variety‘s Claudia Eller that “the math doesn’t work…there’s no way to explain it…the world has gone mad…it’s a mind-boggling deal.”