It Came From Ohio

For whatever perverse reason Sundance programmers will occasionally select a mostly dreadful, all-but-unendurable film to play in the Premieres section. The common consensus is that Bryan Buckley‘s The Bronze is one of these films. I can’t speak from authority because I left around the 15-minute mark, but I could smell trouble even before it began.

Standing before the Eccles crowd and delivering his opening remarks, Buckley, 51, was affecting a look of a ski-slope party animal with a bright red parka and long blonde hair worn in a shaggy Iggy Pop or Chris Hemsworth-in-Rush style, and right away I was muttering, “No good can come of this….not from this guy.”

I was right. Written by Melissa Rauch (The Big Bang Theory) and her husband Winston, pic is about Hope (Rauch), a former Olympic gymnast who won a bronze medal in ’04 and is still coasting on that modest memory, ten years on, as she resides with her dad (Gary Cole) — the very embodiment of a self-entitled, delusional loser. Buckley had told the crowd they would be detesting Hope almost immediately, so the name of the game was “how hateful is this bitch going to be?”

I decided within minutes — seconds, really — that my life would not be significantly diminished if I never found out. The easy-lay types were laughing but half-heartedly. An aura of uncertainty and then discomfort began to permeate the room. I grabbed the cowboy hat and bolted. I emerged from the Eccles a free man, elated and renewed and striding purposefully down Kearns Boulevard as I sucked in the frigid night air. 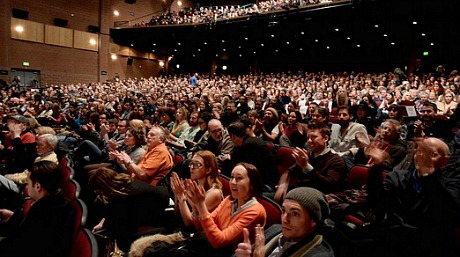