When exactly did the campaign of Hillary Clinton begin to sputter and sink and Barack Obama‘s start to surge? I’m as amazed as anyone else that this change has kicked in over the last two or three weeks, but what was the event trigger? The notion that Obama might actually win in New Hampshire…I’m almost afraid that saying the words will jinx things. It’s not in the least bit settled, but suddenly it’s not insane to imagine next year’s race being between Obama and Mike Huckabee. 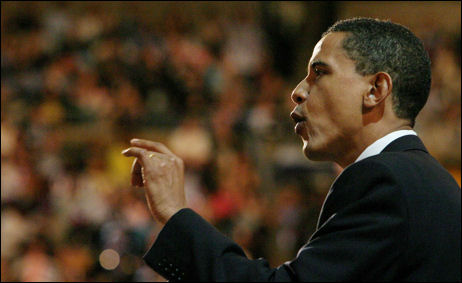 Could it be that average Democratic voters are finally catching up to where Andrew Sullivan was at nearly a year ago when he talked about his Hillary Clinton “cooties” problem?

“The campaign of Mr. Obama, which slogged uncertainly through a period in the late summer and fall, alarming contributors who feared that he might have missed his moment, is now brimming with confidence,” reports the N.Y. Times‘ Jeff Zeleny. “His speeches are noticeably crisper, his poise is more consistent and many supporters say they no longer must rely upon a leap of faith to envision him winning the nomination.”