Man of Steel‘s 56% Rotten Tomatoes rating is comforting. A failing grade + almost half of the world is on my side. The dark solemn tone is what I liked about it. (Who needs Christopher Reeve-styled mirth? Done that.) And I liked the flashbacking and the avoidance of the Clark Kent/Daily Planet routine. (That’s being saved for the sequel.) Henry Cavill handles himself well — he’s a skilled and likable actor. So the first hour was more or less decent, and then Michael Shannon‘s General Zod and his homies came to earth to possess Superman’s DNA, and the film devolved into a boring, rib-vibrating destructo-slugfest. Arguments pro and con being sought. 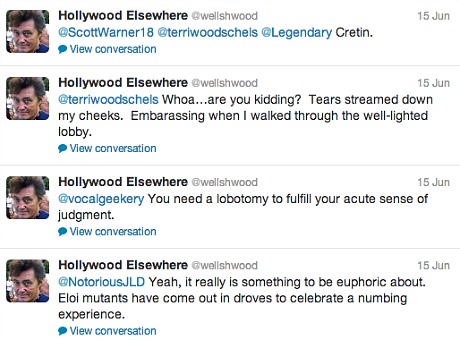