I made it fairly clear on 9.22 and again on 9.23 that Aaron Sorkin‘s The Trial of the Chicago 7 is a truly exceptional smarthouse drama — a character-driven procedural that will hook adults of whatever age.

Despite the tumultuous late ’60s milieu it’s not about the usual noise, rage and chaotic energy, but about thought and procedure and agendas laid face-up on the table. It’s about clarity and drillbits and impressive brain-cell counts.

“This is great,” I was muttering to myself. “I love that I’m in the company of some brainy and passionate people who know about honing and sculpting sentences…why can’t more movie characters talk like this?” Possible answer: Because certain producers, directors and screenwriters are afraid that younger audiences will be put off by screenplays that sound “written” — by rhetorical precision and fine argumentative fencing? I for one loved being in this realm.

The endless trial (September ’69 to February ’70) was about a Nixon administration attempt to nail eight anti-establishment activists for activities tied to violent conflicts during the August ’68 Chicago Democratic convention. 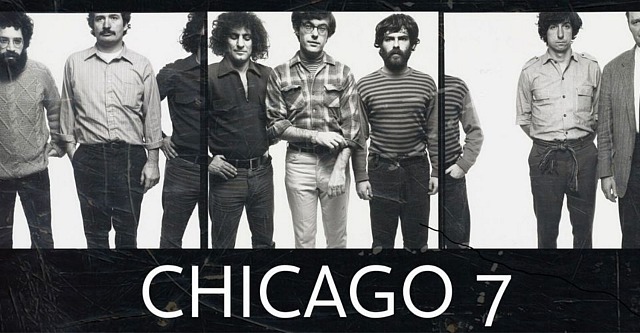 Four of the defendants were Abbie Hoffman, Tom Hayden, Jerry Rubin and activist David Dellinger, respectively played by Sacha Baron Cohen, Eddie Redmayne, Jeremy Strong and John Carroll Lynch. The idea was to convict them for violating the Rap Brown law by crossing state lines in order to incite a riot. In so doing Nixon’s attorney general John Mitchell was ignoring a previous assessment by LBJ’s attorney general Ramsey Clark (Michael Keaton), which was that the conflict was primarily provoked by the Chicago police.

The number of defendants was reduced to seven when the attempted prosecution of Bobby Seale (Yahya Abdul-Mateen) was declared a mistrial.

The Trial of the Chicago 7 works because it’s all on the page — because of Sorkin’s shaping and honing — emphasizing and de-emphasizing to achieve a certain focus and tone. And then he assembled a top-tier cast and hired Phedon Papamichael to shoot it without any muss or fuss. Sorkin could’ve made a half-dozen other films about the Chicago 7 trial with all kinds of attitudes and approaches, but he decided to make this one.

The film’s central conflict is not a good guys vs. bad guys thing, but between Hayden and Abbie Hoffman — between their differing approaches to stoking or harnessing the social unrest.

The Hayden approach dominates, certainly as far as the defense strategy is concerned, but Hoffman’s (and Rubin’s) wise-ass theatricality and flamboyance punches through.

But the payoff (and it’s a rouser) comes when Kuntsler decides to put Hoffman on the stand, which sets the stage for one of those robust Sorkin-crescendo moments.

In so doing Sorkin has burnished Hoffman’s legacy. As noted last Tuesday, he’s made him into a more charismatic and compelling speaker than Hoffman ever was in actuality. Partly because Cohen was enabled to portray Hoffman in just the right way — a certain physical resemblance, a decent stab at his western Massachusetts accent plus the Sorkin makeover. To hell with the fact that the 6’3″ Cohen is almost a foot taller than the Real McCoy — Cohen blows all such thoughts out of the water.

And what a pleasure it is to watch Eddie Redmayne play a reasonable adult in a recognizable realm — no handicaps, no gender-switches, no Les Misérables, no Jupiter Ascending showboating, no Fantastic Beasts, no helium balloons…just a regular, well-educated guy wearing 20th century clothing.

This is a film about radical ’60s behavior and agendas that actually adds up and makes sense in 21st Century terms. There’s no watching it without considering contemporary echoes. Enough said.