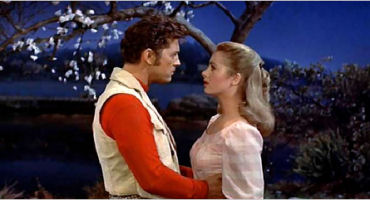 Except something’s wrong here: Variety‘s Michael Fleming announced that Fox 2000 and Jackman’s partner John Palermo were trying to make this happen on August 1 — two and a half months ago. You can bet they were hunting around for a writer for several weeks (if not months) before that. That means that various parties aren’t on the same page — Fox 2000 wants this, Jackman wants that — and they’re going round and round. Otherwise they would have found the right director and writer and begun work. Too bad — Jackman is a talented song-and-dance man, and he’d probably be great in the part.
As long as we’re talking about this musical yet again (mainly because it’s the only Rodgers & Hammerstein musical I can stand, because it’s the only one with a tragic story and dark undercurrents that make for an unusually touching effect), here’s that Frank Sinatra“Soliloquy” track that was recorded but never used because Sinatra bailed on the 1956 film and was replaced by Gordon MacRae.