Carruth Gets In Touch

About an hour ago I briefly sat down with Upstream Color director-writer-producer-star Shane Carruth inside the Prospector Cinema’s “green room.” He even allowed me to take a couple of snaps. He wrote yesterday to suggest a meeting. Carruth says he’s “been a lurker for a while” on Hollywood Elsewhere, which is flattering. 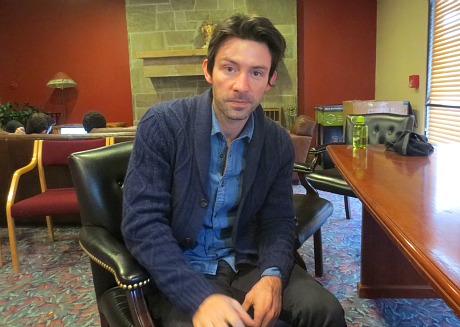 Carruth may or may not evolve into the new Terrence Malick in terms of journalist-dodging reclusiveness, but there’s definitely a certain tension between his having acted in Upstream Color and his previous film, Primer, and the vague dread he feels about being invaded or probed. He’d like to just make films and drop them into the marketplace, he said, without any of the hoo-hah. That’s unrealistic, but Carruth seems like a nice enough guy. Friendly, patient, respectful, impish smile.

And I admire his decision to self-distribute Color — theatrically in April, VOD/digital in May. I offered to run ads gratis if I have any space to spare.
.
He also told me he had a chance to meet Malick in Bartlesville, Oklahoma, during shooting of what was then being called The Burial but eventually become To The Wonder. Malick’s soft manner belies, etc 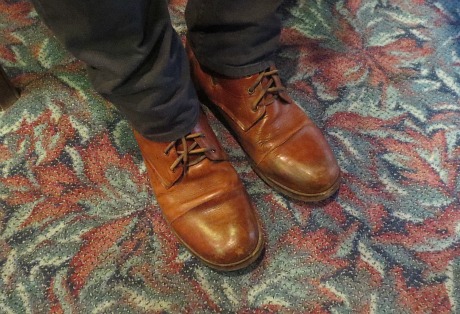 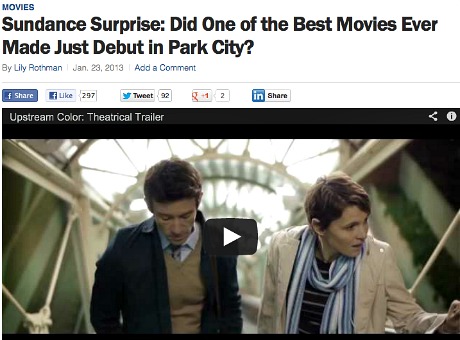 January 24, 2013by Jeffrey Wells16 Comments
« Previous post
Abrams vs. Lucas
Next post »
“You Have Not Heard One Nice Thing…”