Some Came Running‘s Glenn Kenny has published a copy of a 12.8.75 letter written by Stanley Kubrick and sent to projectionists that states unequivocally that Barry Lyndon was shot at 1.66 and that it should be projected at this aspect ratio, “and in no event at less than 1.75 to 1.” 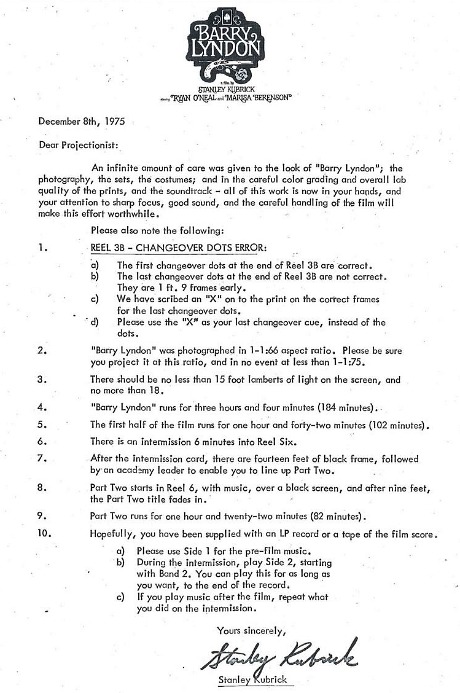 12.8.75 letter from Stanley Kubrick to projectionists about the particulars of presenting Barry Lyndon in theatres.

This is the irrefutable, concrete, smoking-gun proof (which was supplied to Kenny by screenwriter and former Time critic Jay Cocks) that I’ve been right all along about this aspect-ratio brouhaha, and that Leon Vitali, former assistant to Kubrick who infamously declared at a New York press conference last month that the intended aspect ratio of Barry Lyndon was 1.77 to 1, and whose commitment to this piece of revisionist history led to Warner Home Video’s Barry Lyndon Bluray being presented at 1.78 to 1, is dead wrong.

Yes, Kubrick states in the letter than he was willing to tolerate Lyndon being shown at a 1.75 to 1 aspect ratio. It is this allowance, apparently, that Vitali and Warner Home Video seized upon to justify their 1.78 to 1 aspect ratio determination. And yet — let’s try to not misunderstand — Kubrick says in clear and unmistakable terms in the letter that Lyndon was shot in 1.66 and should be projected at that aspect ratio — period, end of story and shut up.

If I were Vitali, I would grab a fishing hat and a fake beard and hide out in the desert for a good two or three weeks until this matter blows over or at least settles down. For he has now been proven to have endorsed misinformation that has slightly distorted and diminished the presentation of a classic film.

12:05 pm Update: I’ve just spoken to Vitali at the Standard Film Company, where he works in some co-managing or partnering capacity with director-writer Todd Field. I asked for an email address, and sent him the URL of Kenny’s article, and asked for a reply after he’s had time to digest it.

I wrote the following to Kenny this morning: “EUREKA! What a SCORE!! Congrats to you, and thanks ever-so-much to Jay Cocks.

“I’m nonethless mystied by the response from a Warner Home Video rep, which you quote in your short piece about the letter: “We stand firmly that we are 100% in compliance with Mr. Kubrick’s wishes” and that ‘the letter from Kubrick to projectionists was the reference for our 1.78 aspect ratio call.”

How does Kubrick specifying 1.66 to 1 and allowing that he will tolerate a 1.75 to 1 presentation become a “reference” for Warner Home Video’s 1.78 aspect ratio call? By what kind of strange, Orwellian, logic-bending process did the WHV rep compose this sentence?