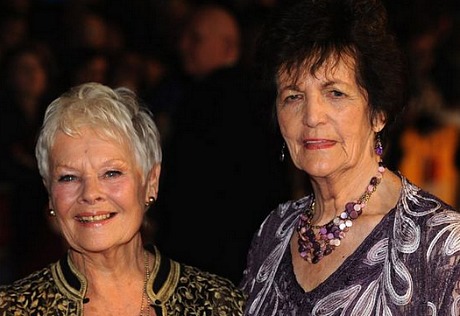 Here’s the actual story, which differs from the one told in the film.

Here’s a re-posting on a two month old HE story called “I Forgive You, Sister”:

“Since catching Stephen Frears and Steve Coogan‘s Philomena (Weinstein Co., 11.27) at the Toronto Film Festival I’ve been expressing how appalled I felt by a bizarre offer of forgiveness that the film ends with — a pass given to an obviously reprehensible old-crone nun who has brought considerable anguish into the lives of an elderly Irish mother and her late son. Why can’t I accept forgiveness in this instance? A Cardinal rule of drama is that the main characters (and particularly the main evil-doer) have to meet with some form of justice at the end, and yet Philomena Lee, the real-life mother played by Judi Dench, can’t shake off a feeling of loyalty to the Catholic Church plus she doesn’t want to live with anger. And so evil skates because old ladies need their serenity.

“Dench has posted an 11.6 HuffPost article stating that she finds it ‘astounding’ that Lee still has her strong religious belief even after everything that was done to her. And yet she rationalizes Lee’s forgiveness in a chat with Guardian interviewer John Hiscock, explaining that Lee ‘didn’t want to be angry and I know I couldn’t live with that’ — anger, I presume she means — ‘and be able to do that. There are very, very few people of Philomena’s magnitude and strength who are able to turn around at the end of the journey and forgive the nuns for what they did.’ She did so, says Dench, by way of faith in the church, a ‘faith [that] is unshakeable — as strong as it always was.'”

In short, it was a more or less admirable thing for this kindly old lady to forgive an evil act. On top of which it was healthy and positive-minded to divest herself of anger, which only eats you up in the end. I’m sorry but that’s a perverse rationalization.

“A gentle, intelligent, tender-hearted dramedy, Philomena is about Lee and Sixsmith (Coogan), a journalist, looking for a son she was forced to surrender for adoption back in the mid ’50s, and about the fiendish Irish nuns who, consumed by the belief that Philomena was an unfit mother due to becoming pregnant out of wedlock, arranged to sell the boy to an American couple. This evil was compounded by the nuns (a) refusing to share the facts of the son’s origins when he returned to Ireland as a grown AIDS-afflicted gay man, trying to locate his biological mom, and (b) refusing to tell Philomena anything about the whereabouts of the son when she inquires with Sixsmith.

“As I wrote in my Toronto Film Festival review, Dench’s character giving the nuns a pass ‘gives ‘forgiveness’ a really bad name. Thank God that people made of sterner stuff have stood up and rebelled against the fiendish in similar moments of the past. Think of where we’d be if people of Dench’s mettle had prevailed and/or set the tone over the centuries when moral crimes and atrocities have been revealed. May the saints protect us from kindliness and turning the other cheek and ‘live and let live,’ and particularly blind loyalty to the Catholic Church.”

“Dench has been around long enough to know that there is a difference between feeling angry about something and having a resolute conviction that certain acts are evil, be they institutional or otherwise, and that nothing decent can come out of forgiving them. By Dench’s rationale it would be ‘astounding’ but admirable for a woman to forgive the Chilean military under Augusto Pinochet for having murdered her son or husband. Or for a mother of a son who was repeatedly molested by a Catholic priest to say ‘I forgive you, father — your sexual longing was too strong for you to suppress, and I am not going to succumb to anger because of this. Plus I am a Catholic and so I owe you my loyalty.'”

January 7, 2014by Jeffrey Wells7 Comments
« Previous post
All Over The Map
Next post »
John Simon vs. “Mere Gapers”