A 7.9 report by Blogspout’s Karina Longworth about an apparent intention to show Steven Sodebergh‘s Che at the next New York Film Festival was noticed today by Lou Lumenick‘s N.Y. Post blog (along with a half-amusing headline — “Lincoln Center Braces for Che-Mania as Film Fest Books Commie Epic“). 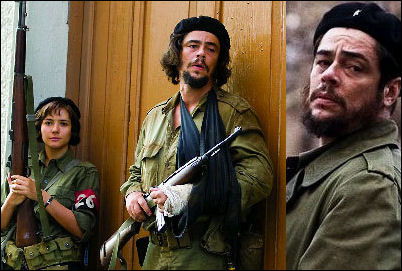 Longworth found her information on the evening of 7.8 while perusing the online version of the July/August issue of Film Comment (like NYFF, a production of the Film Society of Lincoln Center) and on the issue’s index page, there was a preview of the magazine’s September/October issue [which apparently referred to a Che presence at the NYFF]. “For whatever reason,” says Longworth, “if you go to that page today the preview no longer exists, but since it’s still in the Google cache, I was able to screencap it.”
Longworth also links to an announcement from Mumbai’s UTV World Movies channel that Che will be shown on Indian television sometime later this year, apparently in concert with the 50th anniversary of the Cuban revolution, or sometime in December.