For the first time in my professional life I’ll be attending the Telluride Film Festival, which starts in three and half weeks and runs from 9.2 through 9.5. Thanks to Shannon Mitchell for cutting me a nice break with the press credential deadline, and also to co-directors Tom Luddy and Gary Meyer for presumably approving this. I’ve read and heard about this festival for so many years, and now…finally.

I’ve never done Telluride before because of the high cost, but I’m doing reasonably well these days and I’ve figured a way to afford it, despite the bruising $780 tab for a festival pass. One, I’ll be round-tripping into Albuquerque, New Mexico for $300 and change and then renting a car and driving up to Telluride. It’s only about 200 miles, which I can do standing on my head. (If anyone else is travelling this way get in touch — we can share car rental costs.) Two, producer-writer Glenn Zoller, who has passed along observations during previous Telluride festivals, has generously offered a free flop in a bunk bed in his dad’s Telluride home so that covers lodging. So it’s not going to hurt that badly.

Nobody sane flies directly into Telluride airport, I’m told, because the runway is on a cliff or a plateau of some kind. A journalist pal says a pilot once told him he’d never land at that airport. The legend is that the danger factor is roughly similar to taking-off-and-landing conditions faced by Cary Grant and friends in Only Angels Have Wings.

Telluride screenings will also open up my Toronto schedule, etc. I’m guessing that the usual-usuals will screen in Telluride — The Descendants, Moneyball, The Ides of March, Terrence Davies‘ The Deep Blue Sea, A Dangerous Method, Albert Nobbs, Shame, Werner Herzog‘s Into The Abyss, etc. And after all this effort, it would be entirely welcome and appropriate if they show Martin Scorsese‘s 210-minute George Harrison: Living in the Material World. 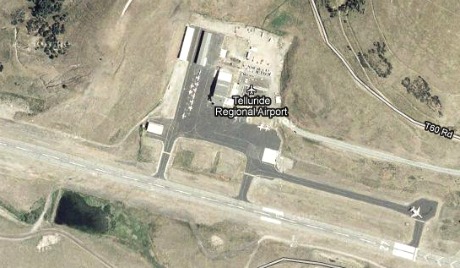