Two movies about issues of trust, truth-telling and fidelity between loving couples played during the Toronto Film Festival, and the lessons of both — Tony Goldwyn’s The Last Kiss (which opened Friday) and Bob Goldwaith’s Sleeping Dogs Lie (Samuel Goldwyn, 9.29) — are pretty much the same but told from different gender perspectives. 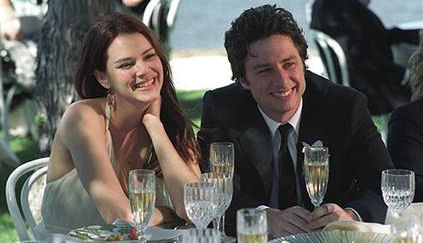 They both say don’t lie to your partner about anything — lies are poison– but at the same time don’t tell them the absolute 100% truth, which can be worse than lying.
The Last Kiss is about 30 year-old architect Zach Braff freaking about girlfriend Jacinda Barrett suddenly being pregnant and deciding to go on a hot date with a pretty college sophomore he meets at a party (Rachel Bilson), and the very same night getting busted by Barrett when one of his good buddies fails to lie for him. Braff begs for forgiveness, telling Barrett that nothing happened (which is true) but she makes him leave their home anyway. Naturally, he goes right over to Bilson’s place and plays hide the python.
< ?php include ('/home/hollyw9/public_html/wired'); ?>
The next day Barrett has begun to relent and is thinking about taking him back, but Braff has been given fatally bad advice by her dad (Tom Wilkinson), to wit: “Unless you’re completely honest with her, you’ll lose her.” So a little later on when Barrett says to Braff, “You really didn’t sleep with her?”, he spills the beans….and their relationship is all but toast. Hello? Total candor can be ruinous.
Sleeping Dogs Lie, directed and written by Goldwaith, is about another relationship ruptured by truth. Sweet, emotionally adjusted Amy (Melinda Page Hamilton) is persuaded by her nice-guy finance John (Bryce Johnson) to share every last little truth about her past. Encouraged, once again, by an idiotic parent (her mother) as well as a friend at work, both of whom urge complete honesty, she tells John her kinkiest sexual secret, which is that she once gave her dog a blowjob. 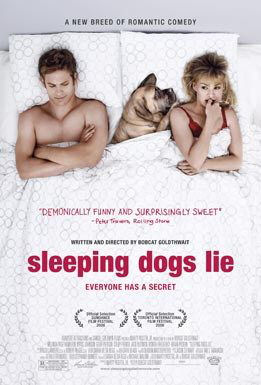 Does John take it like a man? Of course not. He freaks. He’s repelled. Lesson repeated: there are some things you should never share. Whole hog truth-telling is a recipe for disaster.
Obviously The Last Kiss has more to say about guys lying or not lying to their wives or girlfriends, and Sleeping Dogs Lie addresses just how honest women should be with their boyfriends or husbands.
From a guy’s POV, one of the worst things you can do to a girlfriend is to say, “I fucked somebody else.” Or to let her find this out if you did. Knowledge of infidelity hurts like a sword-stabbing. It breaks the other person’s heart and pretty much destroys whatever trust you had with them before. It’s a terrible thing to do to anyone you care for and respect.
I’m basically saying that the important thing is to never let your partner feel the pain of knowing what you’ve done if you’ve done it. If, I say. The important thing for a cheater (a one-timer or a serial) is to be an astonishingly good liar, and that means covering your tracks like a CIA agent in East Germany in the early ’60s, and making absolutely dead sure that she never finds out, even accidentally. 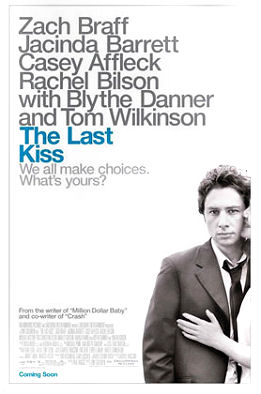 Cheating is obviously not a good thing for any relationship, but if you ever wade into those waters do so with the utmost caution and take it very, very seriously. That’s all I’m saying.
People are going to do what they’re going to do. Nobody’s perfect. Fidelity is the best policy but how many of us can say we’ve never sniffed around and maybe let something happen once or twice? Down cycles and odd episodes and tomcat compulsions come and go. I’m not advocating cheating, but if it happens — if — go there with the utmost consideration for your partner’s feelings, which means you need to keep them totally, totally in the dark.
Guys always tell their girlfriends or wives that their past relationships with other guys means nothing. They’re lying. They do mean something, and they will judge the shit out of you if you tell them too much. There is nothing to be gained by spilling every last detail about an ex-boyfriend, or boyfriends. You can only lose by doing so.