If anything my friend’s email underlines my suspicion that when all is said and done the Best Picture race is going to boil down to a three-way between (a) Steve McQueen‘s Slave, the devastating, guilt-tripping masterpiece that white conservatives and milquetoasts of all ages are, I’m hearing, going to push back against because it’s going to make them feel sad and contaminated by their history and vaguely depressed; (b) Banks, which is basically about Hollywood whimsy and confection vs. aching, honestly recalled human experience with Hollywood fizz winning out in the end — a film that you could almost call the anti-Slave in terms of theme and artistic design; and (c) David O. Russell‘s American Hustle, the unseen wildcard that might emerge in the end as the compromise choice because it’s not too dark (i.e., Slave) or too light and fanciful (Banks) and because it’s Russell’s moment after two years of near-triumph with 2010’s The Fighter and last year’s Silver Linings Playbook.

As we all know Saving Mr. Banks is not so much about the making of Mary Poppins (’64) as the fierce creative conflict between Miss Travers, the creator of the Mary Poppins character and author of four Poppins books, and Walt Disney, who finally bought the rights to make a film version after trying unsuccessfully for 25-plus years. Disney brought Travers to Hollywood in 1961 to work on the script (as script approval was in her contract), and the story is basically about these two butting heads over two visions of what the film could and should be — the mostly synthetic, partly animated, family-friendly translation that Disney wanted to make (and in fact did make at the end of the day) and the more emotionally-grounded Poppins that Travers had in mind.

For Travers, Mary Poppins is not about whimsy and fantasy but the difficulties of real adult life and about the complex and shadowed fate that awaits all children. For her Poppins is personal — partly a story of her father’s anguish — and is definitely not about sugar-coating, and so while she needs the money, she despises the idea of turning an obviously fanciful and yet lamenting personal tale into a mostly shallow, slap-happy Disney film with hummable tunes. Marcel’s script conveys an experience familiar to all screenwriters and filmmakers, about the occasional frustration and anguish of translating a work of great personal meaning into a commercial motion picture, and about the dilutions and compromises and (when a family film is being made) sugar-fizz stirrings that are sometimes part of the process. 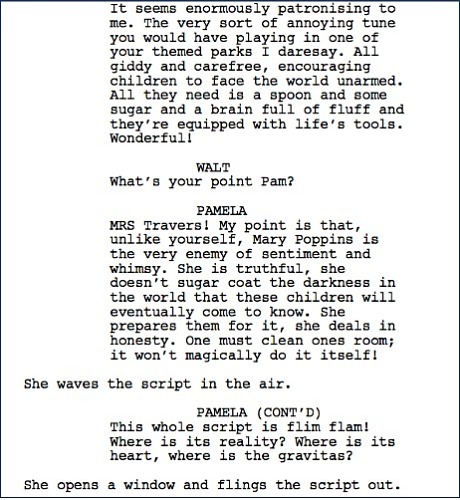 Consider this paragraph from Travers’ Wiki page: “So fervent was Travers’ dislike of the Disney adaptation and of the way she had been treated during the production, that when producer Cameron Mackintosh approached her about [a Mary Poppins] stage musical when she was into her 90s, she acquiesced on the condition that only English-born writers (and specifically no Americans) and no one from the film production were to be directly involved with the creative process of the stage musical. This specifically excluded the Sherman Brothers from writing additional songs for the production, even though they were still very prolific. However, original songs and other aspects from the 1964 film were allowed to be incorporated into the production. These points were stipulated in her last will and testament.”

If you ask me there’s a huge irony running through Saving Mr. Banks, or through Marcel’s script at least. Apart from the obvious fact that Mary Poppins became a commercially successful film that millions have treasured for decades, Travers was right and Disney was wrong. Has anyone tried watching Mary Poppins lately? I popped in the DVD six or seven years ago and I can tell you it’s all but unwatchable, partly because of the tone of emotional fascism (“You will join us in feeling joyous about ourselves and our slap-happy songs or we will torture you to death with merriment”) and the relentless bounce and saccharine vibe but also because of the detestable Dick Van Dyke. He turns on the smiles and the mirth spigot and the pop-pop-pop with his first entrance and doesn’t quit until the film ends. Van Dyke is so Godawful that I began fantasizing about finding a heroin dealer and shooting up as a way to find emotional balance. I don’t know what kind of film Travers had in mind or whether it would have worked, but I know that sentiment and fizz always age badly.

This will be evident and then some when the new Mary Poppins Bluray streets on 12.10.

From my 5.12.13 piece: “Marcel’s script, which appeared on the 2011 Black List, is so wise and clean and well-crafted that you can hear Hanks and Thompson say the lines as you read them. It seems highly likely that Thompson will end up as a lead contender for Best Actress; Hanks will almost surely be nominated for playing Uncle Walt, although there might be a question as to whether his performance belongs in the lead or supporting category.

“No one knows how the film will turn out as a whole, but the director, John Lee Hancock (The Blind Side, The Rookie, The Alamo), is probably the most skilled guy in the business when it comes to giving G or PG-rated or family-friendly material a certain echo-y gravitas, so don’t be surprised if Saving Mr. Banks ends up as a Best Picture contender.

“It also seems as if a Best Original Screenplay Oscar nomination for Marcel is all but assured. The writing is so skilled, assured and articulate about conflict and the creative process. It’s mostly about Thompson’s Travers (Hanks’ Disney is a co-lead, but his screen time is almost that of a supporting character). The script is split between the present (1961, when Travers went to Los Angeles to collaborate on the Poppins screenplay) and her childhood past in 1907 Australia as she witnessed her banker father, Robert Goff Travers (Colin Farrell), suffer through professional and financial hell. Her father was the model for Mary Poppins’ brusquely-mannered employer, Mr. Banks.

One other thing about Travers, according to Valerie Lawson‘s biography titled “Out of The Sky She Came” but more precisely her Wikipage: “Although Travers never married, she had romantic relationships with both men and women. Her biographer Valerie Lawson writes that she probably had a sexual relationship with Madge Burnand, and certainly one with Jessie Orage.”