The hard-luck Christian Brando, the 49 year-old son of the late Marlon Brando, “died this morning at 1:47 a.m. at the Hollywood Presbyterian Medical Center in Los Angeles,” according to the N.Y. Post. The poor guy — never caught a groove or a break, cursed by the neuroses of his parents (his mother was the high-strung, irrrationally-behaved Anna Kashfi), an erratic upbringing and a murder on his conscience. 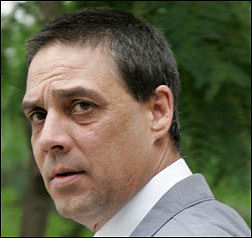 CB: “Hey, dad.” MB: “Christian! You’re here! Give me a hug. Wait…what year is it? There are no clocks or calendars in heaven.” CB: “2008…January. I’ll be missing the South Carolina primary, not to mention the Democratic candidates’ debate on Wednesday in Los Angeles.” MB: “My boy, what happened? You were only 49. I’m so sorry. Life is so short as it is. Forgive me, Christian. I love you. You were such a beautiful boy.”
Does the triumvirate of Brad Renfro, Heath Ledger and Christian Brando — three Hollywood kids who died by their own hand — amount to a standard “rule of three” (i.e., the tendency of the famous to die in groups of three within days of each other), or did they pass away too many days apart?