Forrest Wilder‘s 8.3 Texas Observer piece about the ties between Texas Gov. Rick Perry and a Pentecostal-on-steroids holy-roller nutbag sect called the New Apostolic Reformation doesn’t exactly say Perry is in the tank for these guys…but he’s clearly winking at them a lot. In Perry the NAR “may have found their vessel,” he writes, “and the interest appears to be mutual. 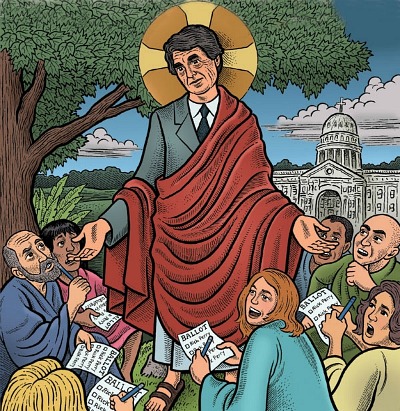 “Why would Perry throw in with this crowd?,” Wilder asks. “One possible answer is that he’s an opportunistic politician running for president who’s trying to get right, if not with Jesus, with a particular slice of the GOP base. Perry is a white southern conservative male who may end up running against a black president. It doesn’t take a prophet to see that he could use friends like these.

“There’s one other possible reason for Perry’s flirtation with the apostles, and it has nothing to do with politics. He could be a true believer. He’s certainly convinced the movement’s leaders. ‘He’s a very deep man of faith and I know that sometimes causes problems for people because they think he’s making decisions based on his faith,’ says Texas pastor Tom Schlueter. ‘Well, I hope so.’

“But the danger of associating with extremists is apparent even to Schlueter, the man who took God’s message to Perry in September 2009. “It could be political suicide to do what he’s doing,” Schlueter says. “Man, this is the last thing he’d want to do if it were concerning a presidential bid. It could be very risky.”

Schlueter and fellow pastor Bob Long “consider themselves modern-day apostles and prophets, blessed with the same gifts as Old Testament prophets or New Testament apostles,” Wilder reports. During their September ’09 visit to Perry’s governor’s office in Austin Schlueter and Long “told him of God’s grand plan for Texas. A chain of powerful prophecies had proclaimed that Texas was ‘The Prophet State,’ anointed by God to lead the United States into revival and Godly government. And the governor would have a special role.

The day before this meeting, Schlueter “had received a prophetic message from Chuck Pierce, an influential prophet from Denton, Texas. God had apparently commanded Schlueter — through Pierce — to “pray by lifting the hand of the one I show you that is in the place of civil rule.”