Michael Cimino‘s relatively new Twitter account (it’s really him) is moderately exciting. But I can’t lie down for anyone attempting to mythologize John Ford beyond (my idea of) realistic proportion. Ford is the greatest artist, a timeless poet, etc.? Sorry but I had to take issue, as I have nmerous times before. 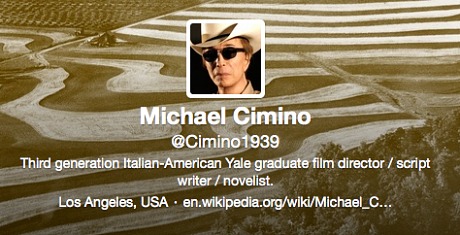 John Martin Feeney’s sense of pictorial balance was rarely matched, but he peaked from The Informer to My Darling Clementine, and then resurged with 1962’s The Man Who Shot Liberty Valance. And even that had problems (starting with the fact that Stewart and Wayne were way too old for their characters). Ford’s iconic Monument Valley films of the ’50s and early ’60s have gotten all the attention because they’re simple to digest, but they lack the shaded complexity and the unpretentious straight-deal naturalism of his best films (like The Grapes of Wrath and Drums Along The Mohawk) and they’re way too sentimental.

The over-praising of The Searchers in particular (which began 33 years ago with Stuart Byron‘s New York article “The Searchers: The Super-Cult Movie of the New Hollywood“) has gone on long enough. It’s a noteworthy western but take it easy. 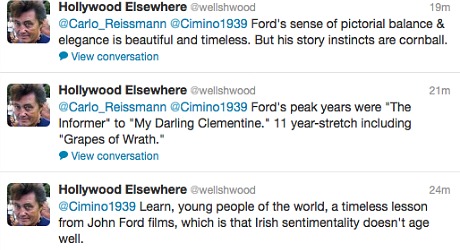