Because of Joe Leydon‘s South by Southwest review, I went to Observe and Report last week expecting some kind of semi-bold game-changer — Seth Rogen as a twisted but mordantly humorous Travis Bickle, certainly no Paul Blart Mall Cop (and perhaps even a kind of anti-Blart), and maybe even a “comedy” without laughs that goes in a much darker and twisted direction than any 21st Century laugher has before. 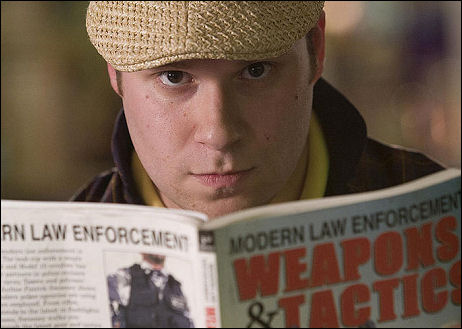 Well, it’s darker and creepier, all right, and I suppose it deserves a point or two for not shovelling the usual dumb-ass shtick. And yes, Rogen’s Ronnie Barnhardt, a psychologically distressed mall cop, represents a new level of myopia and malignancy in big-screen comedy. And so yes, Jody Hill, the director-writer, has certainly avoided the usual b.s.

Except he doesn’t in the end. Or in the beginning and the middle, for that matter. Observe and Report is my idea of amateurish, sloppy, and even cowardly crap. I didn’t completely hate it, but I was constantly scowling and seething at Hill’s flaunting of the absurd unreality of it, and I never laughed once. Sorry, but take away the shock value and it’s a deplorably bad film.

I blame the SXSW critics for building it up too much. If I had gone to this thing cold I might have come out feeling a bit more accepting or at least forgiving. But to say that Hill’s film is coming from a similar aesthetic or stylistic zip code as Martin Scorsese‘s Taxi Driver shows appalling judgment. And to express serious excitement about it means…I don’t know, that certain critics have been bored with recent films and are lunging at straws?

There’s no way you can listen to guys like New York‘s David Edelstein (“earns its cathartic climax”) or Cinematical‘s Scott Weinberg (“a wonderful freakin’ thing”). Trust me, they’re jerking themselves off. 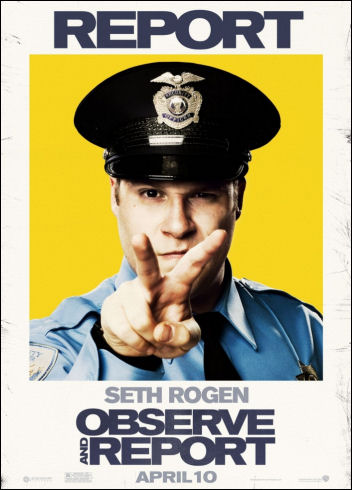 Observe and Report is basically absurdist shtick with no investment in any kind of human behavior you can even begin to half-believe. Which Hill had to sell in order for the twisted-Ronnie stuff to kick in to any degree. The lesson for me is that Hill lacks even rudimentary skills in the building of story or theme or verisimilitude. He obviously thinks he’s on to something here because he’s nervy. Which he is — I’ll give him that. But there’s a lot more to this game.

It’s one thing to make a stupid comedy with idiotic occurences that could never happen in real life, but Observe and Report is trying to do something else here — to look with some degree of semi-comic honesty into the enraged and diseased heart of a lonely fat bipolar nerd (Rogen) who was brought up dysfunctionally and creepily by an alcoholic and once-promiscuous single-mom (Celia Weston).

Observe and Report has instead persuaded me that Hill is a copout compromiser who lacks the courage of his interests and instincts. He’s made a semi-dark nerd-psychopath comedy and (just to be safe) a moronic, logic-free, dumb-ass Paul Blart comedy with an ending that…I’d better be careful here. I could certainly call it radically un-Bickle-esque. Unless you believe (like me) that everything that happens in Taxi Driver after the Lower East Side shootout is Bickle’s fantasy.

I found the Observe and Report finale infuriating for a film that is supposedly delving into the dark side and dealing with human derangement with at least a semblance of bluntness.

I haven’t time to get into the performances (need to be in the city to deposit a check)…later. 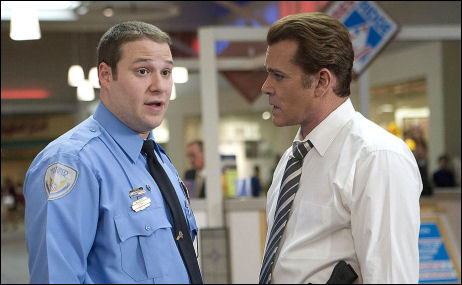