After directing films for no other studio but Warner Bros. for 28 years straight (i.e., except for Columbia’s Absolute Power), Clint Eastwood will briefly jump ship when he makes his next movie — a time-shifting father-son World War II flick called Flags of Our Fathers — for DreamWorks this summer.
The film will be based on James Bradley and Ron Powers’ book of the same name, which was published in 2000. It recounts the sometimes tragic tales of the six Marines who raised the American flag on Mount Suribachi (*) on February 23, 1945, during the American forces’ battle for Iwo Jima against Japanese occupiers.

In less than a month’s time (from 2.19.45 to 3.10.45), more than 22,000 Japanese soldiers and 5,391 U.S. Marines were killed, with an additional 17,400 Americans suffering wounds.
One of the six flag-raisers was Bradley’s father John, a Navy corpsman who later received the Navy Cross for bravery under fire. The senior Bradley, who died in 1994, never told his family about his heroism, and only after his death did James Bradley begin to piece together the facts.
< ?php include ('/home/hollyw9/public_html/wired'); ?>
As I understand it, the film will portray the younger Bradley’s investigation of his dad’s experience in a narrative, non-documentary, actors-speaking-lines fashion, as well as the back-stories of the other five flag-raisers, presumably with the use of frequent flashbacks and whatnot.
Eastwood couldn’t be hotter right now with the nominations and coming Oscar noms for Million Dollar Baby, etc., and it does seem as if directing a film without Warner Bros. funding for the first time in nearly three decades would be a milestone of some kind. But making Flags of Our Fathers for DreamWorks doesn’t mean he’s pulling up stakes.
That would be a significant story, but a guy who’s close to the situation is saying “nope.” 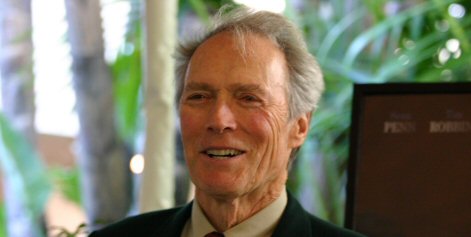 Eastwood is not acting, he says, on an alleged long-simmering frustration with Warner Bros. execs, including president Alan Horn, over their purported lack of enthusiasm for his making Mystic River and Million Dollar Baby …although WB execs were naturally delighted with both after they caught on.
Eastwood’s frustration was very real last spring when the Million Dollar Baby negotations were hanging in the balance and Warner Bros. execs were exuding, I’ve heard, half-hearted enthusiasm over the boxing film.
Nor is Eastwood venting, I’m told, over Warner Bros.’ reported lack of faith in both Baby and the earlier Mystic River as indicated by the Burbank-based studio having allegedly sold off foreign rights to both films at a lower price than their U.S. receptions would indicate.
That’s all water under the bridge, my guy tells me. Relations between Eastwood and Horn these days are pleasant and amicable, he says.
Eastwood, I’m told, will simply direct the Iwo Jima film, working from a script that was completed last August or thereabouts by Million Dollar Baby screenwriter Paul Haggis. He’ll then return to Warner Bros. after Fathers is wrapped and promoted to make another Haggis-scripted film, the details about which my source was unwilling to confide.
The DreamWorks deal, which had its first stirrings when DreamWorks partner Steven Spielberg, who’d worked with Eastwood on The Bridges of Madison County in ’95, sent the “Flags of Our Fathers” book to Eastwood last year, with urgings that he consider directing a film version. 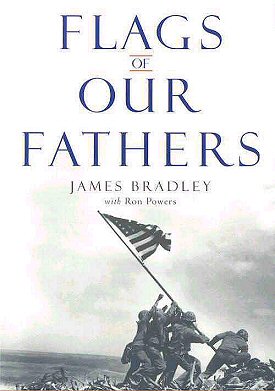 Eastwood read it, liked it and approached Haggis to adapt it in January ’04. The intention to shoot the film for DreamWorks was more or less decided upon, I’m told, before the Million Dollar Baby animus happened last spring.
Although a DreamWorks spokesperson told me yesterday that nothing is really in place on the Fathers project, the closely-involved guy says it’ll definitely film this summer, probably on Iwo Jima itself and perhaps also on one of the Hawaiian islands (i.e., somewhere where there are black-sand beaches).
No Fathers casting or anything else is happening just yet. Eastwood and DreamWorks are “going over budget issues” right now.
(*) The flag-raising by the six G.I.’s was actually the second that happened atop Mt. Suribachi on 2.23.45. Another U.S. flag was raised around 10 a.m. by five G.I.’s, but the event was repeated for p.r. purposes a few hours later with a second flag (on top of a 100-pound pole) and photographers capturing it for posterity.
Explanation: Clint’s Absolute Power (’97) was initially distributed by Columbia, although Warner Bros. currently owns the title due its purchase of Castle Rock…even though the 35mm prints still open with the Columbia logo.

Does it seem to anyone else as if Entertainment Weekly has a very big crush on Finding Neverland? The film’s lead Johnny Depp graced their Fall Preview issue last August 30th, and now Depp and costar Kate Winslet have re-appeared on this week’s cover. And both covers draw attention to big sum-up articles about promising and/or stand-out films. 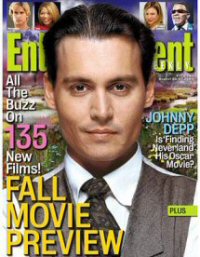 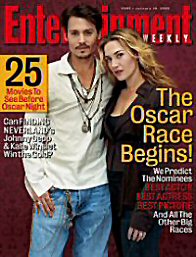 Ignore the first Depp cover, as it was published before anyone had seen Neverland

Let’s just call a spade a spade and say that among EW‘s editors and senior film writers there appears to be a great deal of support for Neverland and Depp getting nominated for Best Picture and Best Actor. Can anyone think of another instance in which a national entertainment publication has so openly lobbied for a particular Oscar contender? I can’t…although it’s probably happened before.
I spoke to EW senior editor Mark Harris about this two or three days ago, and of course he sought to downplay this impression. He said at one point that the August 30th cover didn’t really figure in the Oscar race because it came along at an early stage when almost no one of any consequence had seen it. Still…

There are now 42 intriguing films — 28 that seem especially promising, and 14 that might be worth a tumble — due to open in ’05.
I’ve added five films to the ’05 first-rate list (Breakfast on Pluto, The Ice Harvest, Manderlay, Old Boy, Southland Tales) and four to the maybe list (Aeon Flux, The Constant Gardner, Revolver, Serenity).
These are joining titles assembled in two recent articles about the year’s most promising features ( Whole ’05 Enchilada and Son of Enchilada ). 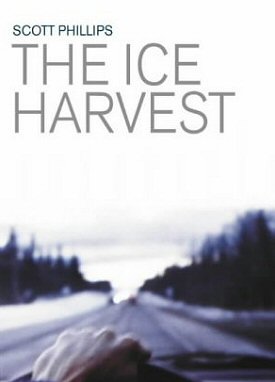 I’m going to start running a box called “Best of `05” (or something less dull-sounding) with all the choices listed whether they’re opening in the first, second or third quarters.
The presumed hotties…
Neil Jordan’s Breakfast on Pluto (Pathe — no U.S. distributor but late ’05 seems fairly likely) Cross-dressing mixed with Irish politics. Set in the 1960s and `70s, a supposed black comedy about an orphan (Cillian Murphy) who escapes from his foster home in small-town Ireland to become a transvestite and a performer in London. Jordan adapted the screenplay from the 1998 novel by Patrick McCabe (The Butcher Boy). Cast: Murphy, Brendan Gleeson, Liam Neeson, Stephen rea, Laurence Kinlan, Ruth Negga.
Harold Ramis’s The Ice Harvest (Focus Features, 11.4.05) Set in Wichita, Kansas (but filmed in the northern Chicago `burbs), based on an allegedly funny Coen brothers-like noir novel by Scott Phillips, and adapted by Robert Benton and Richard Russo. Comedic story unfolds on Christmas Eve, and deals with a sleazy attorney named Charlie (John Cusack) who embezzles $2 million from a Kansas City mob guy (Randy Quaid) with the help of another sleazeball (Billy Bob Thornton). Charlie wants to run off with girlfriend Renata (Connie Nielsen), blah, blah…and the usual complications ensue. An interested party claims “buzz evidently is great so that Focus delayed the release from early this year until the fall.”
Lars von Trier’s Manderlay (No U.S. distrib, probably debuting at Cannes ’05, and if Dogville‘s distribution pattern kicks in it may not open in the U.S. until early ’06). The continuing adventures of Grace, the gangster’s daughter, in 1930s America…only with Bryce Dallas Howard as Grace and Wilem Dafoe (and not the sardonic James Caan) as her dad. Pic is a racially incendiary metaphorical piece about the complicity of African-Americans in their own enslavement. John C. Reilly walked off the film in protest over the killing of an old donkey. Cast: Howard, Dafoe, Lauren Bacall, Jean-Marc Barr, Jeremy Davies, Isaach De Bankole, Danny Glover, Udo Kier, Chloe Sevigny, Zeljko Ivanek. 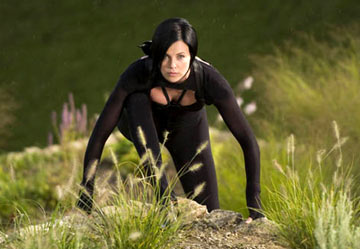 Chan Wook Park’s Oldboy (opengin 3.25) Everyone in the world, it seems, has seen this Taratino-esque South Korean crime thriller except U.S. audiences. Made in ’03, played in Cannes last May. Fans of Amores perros and City of God should probably take notice.
Richard Kelly’s Southland Tales (currently shooting – financial entity unknown). The writer-director of Donnie Darko (and the writer of Tony Scott’s Domino) is currently shooting this musical comedy set in Los Angeles during a heat wave in the year 2008. (Whatever the hell that implies.) Obviously one of those ambitious films that could turn out either brilliantly or horribly. Cast: Sara Michelle Gellar, Sean William Scott, Jeanane Garafalo, Ali Larter, Jason lee, Tim Blake Nelson, Kevin Smith, Kristen Stewart.
And the maybe’s…
Karyn Kusama’s Aeon Flux (Paramount, late ’05). A presumably lesbian-tinged chick action flick, directed by Karyn Kusama (Girlfight ), based on the animated MTV series. Set 400 years in the future, by which time disease has wiped out the majority of the earth’s population except for those living in a walled-off place called Bregna. Theron’s Aeon Flux is a heavyweight among a group of rebels known as the “Monicans” (what is that?….a reference to gay filmmakers who live in Santa Monica?) led by The Handler (Frances McDormand). Cast: Theron, McDormand, Charlize Theron, Marton Csokas, Jonny Lee Miller, Sophie Okonedo, Pete Postlethwaite, Amelia Warner, Caroline Chikezie.
Fernando Meirelles’ The Constant Gardener (Focus Features, late ’05) Brazil’s celebrated City of God director has apparently made a token English-language feature as a “hello, how are you?” commercial credibility enhancer with the U.S. film industry. Adaptation of John Le Carre’s novel about an English diplomat (Ralph Fiennes) in Kenya whose wife (Rachel Weisz) is rubbed out after she uncovering a scandal at a pharmaceutical company. Readers are advised to totally beware any movie co-starring Danny Huston. Cast: Fiennes, Weisz, Huston, Anthony LaPaglia, Pernilla August.
Guy Ritchie’s Revolver (No U.S. distrib, but mid to late ’05 release sounds reasonable). Written and directed by Ritchie, and some kind of chip off the Lock Stock block, or so it seems. Jason Stratham plays a hotshot gambler with a price on his head because he’s humiliated a thin-skinned mob boss named Dorothy during a card game. Cast: Stratham, Ray Liotta, Derk Mak, Vincent Pastore. 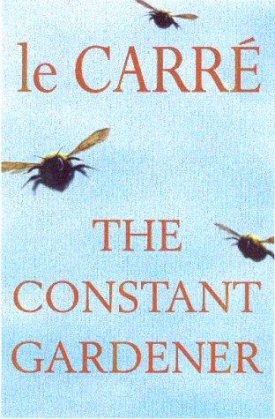 Joss Whedon’s Serenity (Universal, 9.30) The feature-film directing debut of the Buffy the Vampire Slayer creator, and based on a TV show he did called Firefly (which got cancelled after 15 episodes). A favorably previewed (according to rumor), futuristic GenY attitude-in-space thing…small band of galactic outcasts 500 years in the future, a ruffian Han Solo-type guy known as Captain Malcolm Reynolds (Nathan Fillion), leading a crew of misfits, etc. You know the drill…I can feel this movie already, but who knows? It might work. Cast: Fillion, Morena Baccarin, Adam Baldwin, Chiwetel Ejiofor, Sean Maher, Jewel Staite.

The rain storms were over as of Tuesday morning, and it’s blue skies again…until the usual conditions take hold and L.A.’s milky-blah skies return and start in with their usual downer effect. 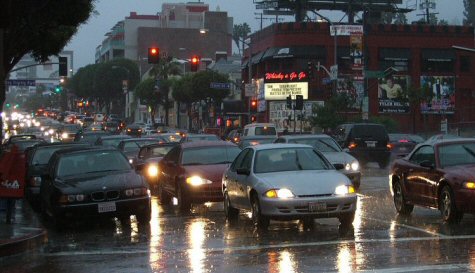 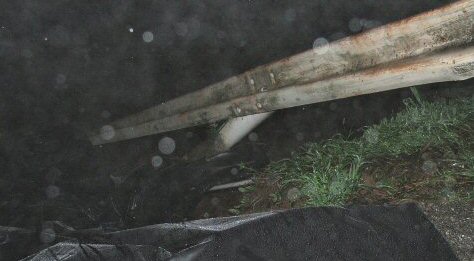 The Sunset Strip shot was taken on Sunday evening during a pizza run. The other was taken late Monday evening on my way home from a screening of Rebecca Miller’s The Ballad of Jack and Rose.
The supports on a guard rail mounted on a curvy road up in the wilds of Nichols Canyon gave way, half-revealing a sheer soggy drop into total nothingness.