Even if Anton Corbijn’s The American was a straight-ahead popcorn thriller, Ethan Maniquis and Robert Rodriguez‘s Machete would kick its box-office ass regardless. I don’t know what The American will be specifically, but it seems to be a truffles and foie gras and elite bullets type of film whereas Machete is strictly a Taco Bell meal with boobs, blood sauce, bikinis and severed limbs, and a side order of pro-Mexican immigrant, anti-racist-cracker politics to keep it spicy. 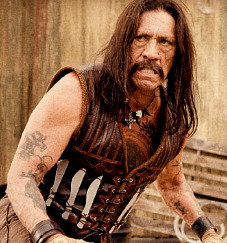 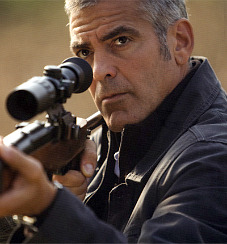 It’s not a slur to say that Machete is aimed at a typical twelve-year-old mentality. For me, the political satire and anti-yahoo stance makes it Rodriguez’s most agreeable film since El Mariachi (’94). But it’s a very primitive and extremely bloody thing, and pretty much an out-and-out gore comedy (although what Rodriguez film hasn’t had some comedic winking going on?), and there are some moderately funny bits here and there. Given a choice, dollars to donuts an American movie audience will always take a chance on primitive and coarse before rarified and austere.

Honestly? If given an either-or choice even I would probably pay to see Machete first. The reason, I’d be ashamed to admit (if I hadn’t already seen Machete), has to do with the Lindsay Lohan revealings.

Kurt Schlichter‘s American screenplay review suggests it may be Machete‘s match in terms of female nudity, although that has yet to be determined.

I’m saying this without having seen any tracking for this weekend (although I’ve heard second-hand that Machete is tracking fairly well among younger males. The two extra days of commercial playing time for The American won’t make that much of a difference, I’m guessing.