Collapse and the Public

Last night I attended the first prime-time public screening for Chris Smith‘s Collapse at the Angelika. It played just as powerfully for me as it did in Toronto. The show was a little more than four-fifths sold out. Producer-director Smith spoke before and after the film. There were many questions. More than a few people in the audience seemed pumped. I was too. 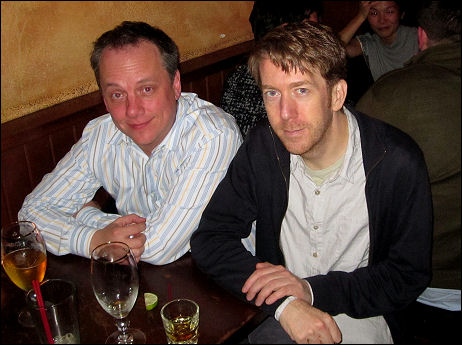 Collapse editor Barry Poltermann, producer/director Chris Smith at Tom & Jerry’s on Elizabeth, about 90 minutes after the finish of Smith’s q & a at the Angelika, following the 7:30 pm show — Friday, 11.6.09, 10:25 pm

Smith reported during the q & a that Collapse star/commentator Michael Ruppert has formed a band called New White Trash, and that the sound they’re putting out is somewhat reminiscent of material by Beck.

I tried to have a chat with Smith in the Angelika’s street-level lobby after the q & a, but people kept coming up and asking him stuff. The lobby music was too loud to record anything anyway. Smith is a bright, easy-going, fair-minded fellow. Obviously sharp and inquisitive, but not a hard-ass. He likes to laugh. He has a sense of irony about everything.

Smith is partnered with Collapse producer Kate Noble. They have places in Milwaukee and in North London. They’ve been staying with Cinetic Media’s John Sloss during their current New York sojourn.

We all went over to Tom & Jerry’s on Elizabeth Street after it was all over — Smith, Noble, Collapse editor Barry Poltermann, composers Didier Leplae and Joe Wong, myself, a 42West rep, various friends, etc. 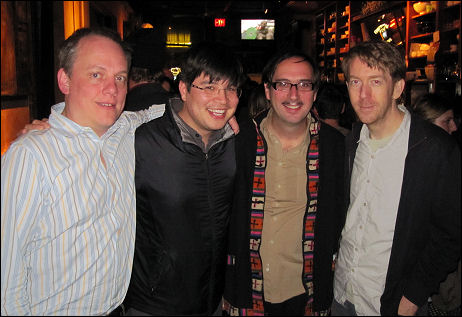 42West has been sending out copies of Collapse to every political-minded commentator and talk-show host in the New York-Washington-LA realm. In a perfect world Smith would be talking soon with Charlie Rose, Bill Maher, Bill Moyers, MSNBC’s Joe Scarborough…all of those guys.

Collapse will be opening next weekend in Los Angeles at the Laemmle Sunset 5. (That’s a shitty place to open a film in — why didn’t Ted Mundorff offer a booking at the Westside Pavillion?) It’s being offered now as a VOD on Cinetic’s FilmBuff.

How can anyone go to 2012 and then say “Naah, I think I’ll pass on the more or less factual, real-life version”? What kind of dull-brained slug do you have to be to make this determination? The only thing to do is to see both, I think. Yes, I intend to see Roland Emmerich‘s latest disaster-porn extravaganza; it’s having an all-media screening here on Monday night.