I went right over to my favorite Starbucks work station (at Bay and Cumberland) right after seeing Chris Smith‘s Collapse, which jolted and melted me down like no documentary has in a long, long while. And as I started to work on a reaction piece, I discovered that Hollywood Elsewhere had gone down. Yes, again. A similar-type wipeout happened last April, and there’s just no alternative at this stage but to sign up with another server, which I’m in the process of doing. HE is back up again, but that’s all she wrote for the Houston-based Orbit/The Planet. 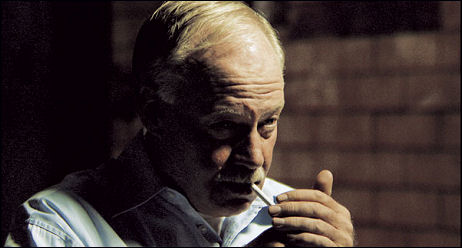 Shot over a two-day period last March, Collapse is basically a Spalding Gray-like soliloquy piece in which Michael Ruppert, a former LA police officer turned independent reporter, author and truth teller, explains in a blunt spoken, highly detailed and extremely persuasive way that our economic and energy-using infrastructure is on the verge of worldwide collapse.

There’s too much debt, too much greed, not enough oil and it’s all going to start falling apart — in fits and starts, bit by bit and then more and more, and then eventually…well, look out. A vast and terrible turnover that will devastate and destruct is just around the corner. Ten years, twenty years…forget it. I listened and listened to what Ruppert said, and “a hard rain’s gonna fall” ain’t the half of it. A survivable scenario, but a very different and much tougher world awaits.

Before I saw Collapse I would have readily agreed with the view that things are very, very bad in terms of the world’s economic and energy scenarios. After seeing Collapse I’m 95% convinced that we’re on the brink of Armageddon — that we’re truly and royally fucked. Get hold of as many organic vegetable seeds as you can and start growing your own food. Hey, Viggo…nice shopping cart!

The 5% of me that isn’t fully convinced has concerns about Ruppert’s personality and temperament, which seem a little bit wiggy at times. He’s been called a 9/11 Truther and, according to a CBC News summary, “claims to have met one of JFK’s shooters.” He seems stable and knowledgable enough and is obviously quite bright, but he chain smokes, is having trouble paying his rent, and is clearly emotionally distraught over the data he’s gathered and the information he’s sharing. Collapse gets into his head and soul the way Erroll Morris‘s The Fog of War burrowed into Robert McNamara.

The reason I’m only 5% concerned with Ruppert is because he fits the paradigm of other crazy prophets who’ve been right. He’s the aged soothsayer who went up to Julius Caesar and said “beware the Ides of March.” He’s Elijah, the man in rags who warned Ishmael in John Huston‘s Moby Dick that “there will come a day when ye shall smell land but there will be no land, and on that day Ahab will go to his grave…but within the hour he will rise and beckon.” He’s I.F. Stone, whose newsletter called it right on so many issues in the ’60s and ’70s.

Isn’t it in the nature of most whole-equation alarmists to be alone and uninvested in establishment currencies and memberships with a tendency to shout from streetcorners, publish nickel-and-dime newsletters or expound in low-budget documentaries such as Collapse?

There’s another reason why I believe Ruppert and why his manner doesn’t bother me all that greatly. The reason is that everything he says in Collapse seems or sounds, to the best of my admittedly limited knowledge, to be absolutely dead-on.

There were three basic kinds of group mentalities aboard the Titanic, Ruppert remarks, once the crew understood the extent of the iceberg damage. The first was the reaction of sheep — “We don’t know what to do, we’re scared, we’re cold, and all we want to do is huddle together.” The second was “yes, this is serious, we get it — and what can we do to build lifeboats?” And the third was “you’re crazy, this ship can’t sink, the people who are saying this are pathetic alarmists, and we’re just going to sit at the bar and enjoy the pleasures of decades-old bourbon.”

The thought that kept hitting me as I watched Collapse was everyone needs to see and really listen to it without drifting into the usual denial patterns. President Barack Obama really needs to see this thing. Even though his ability to do anything about the collapse is limited, to say the least. Ruppert says he’s basicaly a prisoner of the organizations that surround and fortify the power structure that supports his Presidency. Obama doesn’t have the power (and perhaps not even the will, much less solve) to really address the coming calamity. It’s really in our hands.

So what will it be? Huddle, bourbon or lifeboat-building?