I have a military underwear problem with Flags of Our Fathers (Dreamamount, 10.20). Nobody will see what I’m talking about for another ten days and it may seem like a chickenshit thing to bring up, but the final scene of Clint Eastwood‘s Iwo Jima film shows the small group of Marines who raised the U.S. flag atop Mt. Surabachi taking a swim in the Pacific Ocean, and they’re all wearing white underwear. 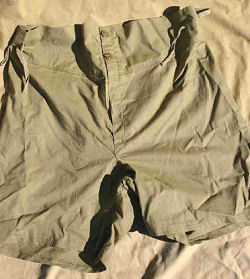 The problem is this: no G.I.’s wore white underwear during World War II — they were all issued olive drab briefs for camouflage purposes. I’m not trying to make a major deal out of this, but it’s definitely a significant error.
As soon as I saw the white briefs I suspected it wasn’t correct, but I wasn’t 100% sure. So I called my father, a former Marine lieutenant who fought at the battles of Iwo Jima and Guam, and he said yup, olive-drab underwear, the film has it wrong.
Then I found a military uniform and accessory site called What Price Glory that says, in discussing 1940s-era underwear, that “soldiers who fought in World War II were introduced to the concept of colored (olive drab) cotton boxer shorts with elastic waistbands.”
I then found another site about cotton apparel that says “during this era of WWII, American troops discovered that the freshly washed white underwear that they hung out to dry attracted enemy fire. A wartime ad for Jockey headlined: ‘Target: White Underwear’ and explained why the armed forces switched from white underwear to OD (Olive Drab), because the latter color blends in with its surroundings more effectively.”
The guys-swimming-in-the-ocean scene doesn’t work for two other reasons. Eastwood deciding to have them wear underwear (two guys jump into the water with their pants on) seems prudish. Was Clint looking to avoid an R rating from all the bare asses and long-shot genitalia? My dad says whenever soldiers took a swim after a battle they always skinny-dipped — nobody wore underwear. He also said that nobody went swimming off the island of Iwo Jima because the water was too cold, the location being in the northern Pacific (only about 650 miles south of Japan) and the time of year being February-March. So the whole scene doesn’t work for me.
Clint has to take the bullet on this one because he’s the boss, but other guilty party appears to be Marynn Scinto, whom the IMDB lists as the “wardrobe costumer” on Flags of Our Fathers.
It doesn’t seem fair, I realize. You work your ass off and get it historically right in dozens of different ways — uniforms, weapons, every last little thing– and then you screw up on the underwear and some guy like me comes along and gives you noise about it. But getting every last detail right is a big part of the challenge in making first-rate films.