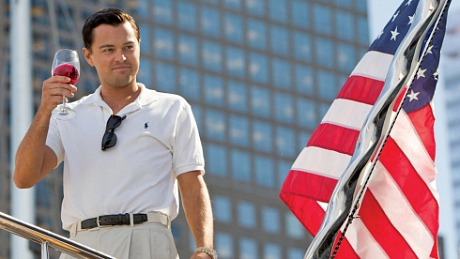 I wrote Stewart the following: “I thought the thinking around town was ‘we’re not going to beat 12 Years A Slave and/or Gravity so let’s open our very good but not entirely magnificent film in early 2014.” Your story says something else. Your story say that George Clooney and Amy Pascal and that bunch sat down and said ‘we’re not going to beat Wolf of Wall Street so let’s open in early 2014.'”

Which led me to wonder if those guys know something I don’t. I’m not saying I “know” anything, but I’ve heard (and this is not from the peak of Mt. Sinai or anything) that Wolf of Wall Street is not necessarily an Academy-friendly thing. So I’m wondering where you heard that Clooney & Co. were shivering and shaking in their boots about the likely 2013 emergence of that run-for-your-lives Oscar blitzkreig that is The Wolf of Wall Street?”

The bottom line is that Scorsese doesn’t make Oscar-friendly films as a rule (too jazzy, made for critics, not emotional enough), and as I’ve explained at least two or three times there was nothing about that dog-eared draft of Terrence Winter‘s Wolf of Wall Street script that made me say “good fucking God, what just happened?…I just felt the earth move!” It’s Goodfellas and Casino meets Wall Street during the crazy ’90s. It’s a completion of a Scorsese trilogy about crazy American hustlers with more or less the exact same story strategy — “I’ve gotta get into this racket…aaah, I can figure this out…whoo, whoo, whoo…this is amazing, I’m riding a comet and having a wild-ass, mind-blowing time…whoo, whoo, whoo…uh-oh, shit’s getting weird…whoa, it’s getting worse…whoa, problems with my lady at home…..whoa, nose candy and heat from the Feds…whoa…CRASH!”

What I’m doing here, I suppose, is trying to diminish the anticipation that the Oscar blogger crowd might be feeling so when they finally see it they’ll have one of those “wow, a lot more impressive than I expected!” reactions rather than “it’s not a Best Picture slamdunker.”

October 29, 2013by Jeffrey Wells16 Comments
« Previous post
Madness In The Blood
Next post »
Battle of the Sobers