Carl Colpaert’s G.I. Jesus is the first truly exceptional Cinevegas film I’ve seen so far.
Compared to the pickings over the last two days, this psychological domestic drama almost feels miraculous. The reception may be more muted out in the real world…who knows? But it’s certainly good enough to play at the Telluride or Toronto Film Festivals, and with some minor refinements it could even end up being distributed. 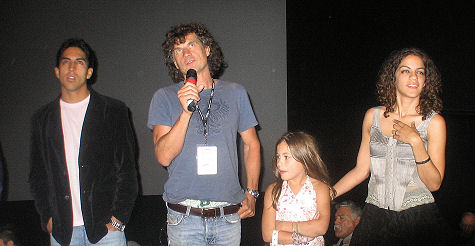 This is a partly real, partly hallucinatory homecoming story that feels connected to a guilt current that seems to be popping up left and right these days among Iraqi War veterans. At times G.I. Jesus plays like a kind of Coming Home for the 20-something veterans of that conflict.
You know the drill: war veteran comes home, feels alienated and haunted, doesn’t relate, picks up evidence of marital infidelity, freaks out. But G.I. Jesus is trippier and more complex than that.
< ?php include ('/home/hollyw9/public_html/wired'); ?>
G.I. Jesus doesn’t unfold from a perspective of a conservative career officer like Bruce Dern’s Cpt. Bob Hyde, the Coming Home character who was heavily invested in the rightness of U.S. handling of the Vietnam War. It stems, rather, from the head of an obviously intelligent young Mexican-American Marine Corporal named Jesus Feliciano (Joe Arquette) who’s haunted by his actions during his time in Iraq.
G.I. Jesus is basically about ghosts from that conflict hovering around Jesus, and a growing feeling of betrayal and apartness between himself and his “Dominican princess” wife Claudia (Patricia Mota), whose materialistic ambitions seem, from his perspective, to be creating a gulf between them. 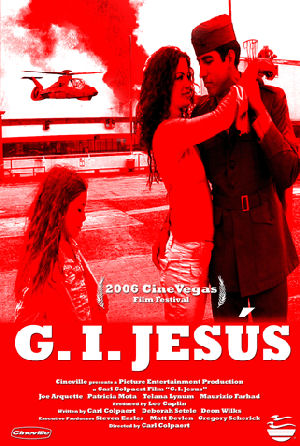 The signatures at work here are “honest,” “unforced,” “thoughtful.” G.I. Jesus has been shot on live video stock (so that it would blend with some real Iraqi war tapes provided by the BBC), which I found exciting, and it’s been extremely well cut by Wayne Kennedy and Nick Nehez, and nicely scored by Carlos Durango.
But there’s a dreamscape element running through the film (as it’s largely happening in Jesus’s head), and because of a decision by director-writer Colpaert to jettison a certain narrative line at the two-thirds mark, the ending, for me, doesn’t quite bring it all home.
I’m always a little bit thrown by movies that inject fantasy into a reality that’s been carefully constructed. Maybe there’s more to it than I realized and I need to see it again.
The key thing, it seems, is that Jesus’s Iraq memories haven’t been erased at the finale (far from it) and the hauntings continue. I’m not entirely sure if all the story strands have been fully dealt with by the finish, but it’s at least a debatable call, and there’s no dismissing the things in G.I. Jesus that succeed. 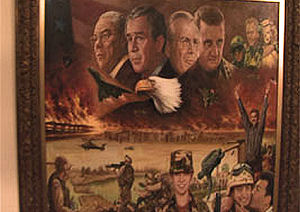 The film is an unquestioned triumph in the matter of Arquette (a very young Latino who’s costarring in Andrew Davis’s forthcoming The Guardian) and Mota’s performances. I believed every word and gesture from these two; everything they say and feel seems genuine.
Probably because the investment seems so complete. Jesus and Claudia have a young daughter, Marina (played by a 9 year-old firecracker named Telana Lynum), a home in a trailer park, and a texture to their characters — sexual attraction, emotional ties, credible backstory.
G.I. Jesus is certainly probing and complex, and the politics behind it are obviously of a leftist humanitarian bent. There’s a shot at one point of a painting meant to evoke the glories of the Bush policy in Iraq. I, for one, found it extremely spooky.
The program notes call G.I. Jesus “an ethereal journey of one man’s struggle…to let go of the pain and agony suffered in combat in order to get on with his life.” That’s not bad, but check out the trailer on the Cineville site for a better taste of it.
Colpaert is the founder of Cineville, and has executive produced several above-average films, including Swimming with Sharks, The Whole Wide World, Hurlyburly, One-Eyed King and The Velocity of Gary. Born in Europe (Belgium, I think) and an American Film Institute grad, Colpaert began as an editor working for legendary producer Roger Corman. 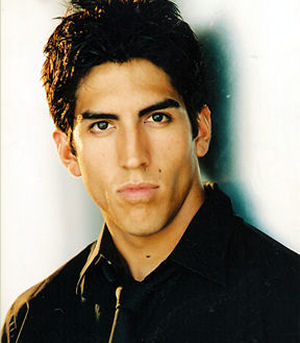 G.I. Jesus costar Joe Arquette. (The only decent shot I could find of the equally dynamic Patricia Mota is on the IMDB, and they don’t allow you to copy and paste.)

I’ve never heard of anything Colpaert has directed before this, but now that I’m stoked I’d like to see The Affair, which he directed and released in ’04.
I mentioned “minor refinements” at the beginning of this piece. Just cosmetic stuff, mainly.
There’s a white Fu Manchu moustache worn in the film by a uniformed American Colonel that I didn’t believe for a second. (Conservative Oliver North types wear only Clark Gable-type moustaches.) Another wrinkle is a young Marine recruitment officer whose hair is too long in the back. Maybe these style choices can be rectified digitally.
I took some pictures of the cast and crew at the Brenden Theatre #5 last night, and I was going to hit the after-party. But I made the mistake of going back to the room to start writing this and took a break on the bed for a second. That was it…out like a light. 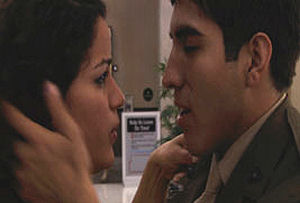