The recently departed Pat Hingle had 84 good years, most of them on stage and in films. He excelled at playing small-town pit bulls — snarlers, bigots, cops, mayors, disapproving dads who barked and brayed, brutes, vulgarians — who caused much torment and unhappiness to various leading men and women (like Splendor in the Grass‘s Warren Beatty and The Falcon and the Snowman ‘s Tim Hutton). The rule of thumb was that if you saw Hingle approaching in a movie or TV show, things were about to get ugly on some level. 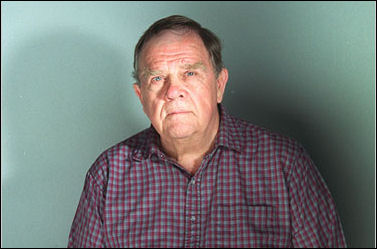 He was a steady and dependable actor whom I always found believable, but whom I never found particularly charming. He had nothing on Burgess Meredith or Lloyd Nolan or even Lee J. Cobb in the ways of slyness and insinuation. Hingle was straight and solid and lumbering. He always came right at a role through the front door. “I’m Pat Hingle,” he always seemed to say through clenched teeth, “and I’m about to get into your face. And you’ll damn well know it because sweat beads will form on my forehead!”

I’m sure Hingle was a good guy in real life. He always sounded like one in interviews. He had kids, a wife, an ex-wife, a life. He was a workaholic. I hear that.

The only time I can remember in which Hingle seemed light and likable and unthreatening was his walk-on as a waiter in that scene with Marlon Brando and Eva Marie Saint in On The Waterfront.

I genuinely disliked his vaguely cloddish presence as Commissioner Gordon in Tim Burton‘s Batman, and in the succeeding Batman films he appeared in. Whenever I think of Hingle, I mostly see him pointing at the Bat-silhouette-in-the-sky and shouting,”He sent us a signal!”

The poor man fell 50-something feet down an elevator shaft in ’59 or thereabouts…good God. He reportedly lost the lead role in Richard Brooks‘ Elmer Gantry as a result. (Thus paving the way for Burt Lancaster ‘s winning the 1960 Best Actor Oscar.) I can’t believe that Brooks truly intended to cast Hingle as Gantry for the simple reason that no one would have believed Hingle capable of seducing Jean Simmons‘ Sister Sharon Falconer. I don’t believe audiences would have stood for it. He wasn’t Uriah Heep….well, actually, he sort of was.

May Hingle rest in peace. His characters certainly dispensed little enough of it on-screen while he was alive.