“I think I might be able to explain some of Sarah Palin‘s appeal,” Roger Ebert wrote last weekend in the Chicago Sun Times. “She’s the American Idol candidate. Consider. What defines an American Idol finalist? They’re good-looking, work well on television, have a sunny personality, are fierce competitors, and so talented. Why, they’re darned near the real thing. 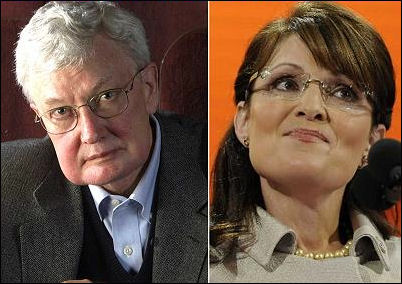 “There’s a reason American Idol gets such high ratings. People identify with the contestants. They think, ‘Hey, that could be me up there on that show!’
“My problem is, I don’t want a vice president who is darned near good enough. I want a vice president who is better, wiser, well-traveled, has met world leaders, [and] who three months ago had an opinion on Iraq. Someone who doesn’t repeat bald-faced lies about earmarks and the Bridge to Nowhere. Someone who doesn’t appoint Alaskan politicians to ‘study’ global warming, because — hello! — it has been studied. The returns are convincing enough that John McCain and Barack Obama are darned near in agreement.
“I would also want someone who didn’t make a teeny little sneer when referring to ‘people who go to the Ivy League.’ Although Palin gets laughs when she mentions the ‘elite’ Ivy League, she sure did attend the heck out of college. Five different schools in six years. What was that about?
“And how can a politician her age have never have gone to Europe?
“But [then] some people like that. She’s never traveled to Europe, Asia, Africa, South America or Down Under? That makes her like them. She didn’t go to Harvard? Good for her! There a lot of hockey moms who haven’t seen London, but most of them would probably love to, if they had the dough. And they’d be proud if one of their kids won a scholarship to Harvard.
“I trust the American people will see through Palin, and save the Republic in November. The most damning indictment against her is that she considered herself a good choice to be a heartbeat away. That shows bad judgment.”
Wait…shouldn’t the sentence read “the most damning indictment against John McCain is that he considered Palin a good choice to be a heartbeat away”?