It didn’t get the love it deserved, but John Lee Hancock‘s The Founder, which opened a little more than five years ago, is easily one of the most fascinating and easily re-watchable dramas of the 20teens — half character study and half hard-scrabble success story, and a film about a highly unusual protagonist — Michael Keaton‘s Ray Kroc — who straddles the line between admirable and not-so-admirable.

Most people don’t know what to do with a character like Kroc. Half-good and half-shifty characters are hard to relax with. It’s okay if a lead character is a bit of an ethical muddle, but audiences generally like their main protagonists to be more sympathetic than not.

Kroc and Scarlett O’Hara aside, what movie characters are the most memorable half-and-halfers? And don’t tell me that Charles Foster Kane belongs in this fraternity. Because he doesn’t.

The Founder is basically the story of how Kroc persuaded the earnest, slightly doltish, small-time-thinking McDonald brothers (Dick and Mick, respectively played by Nick Offerman and John Carroll Lynch) to let him franchise their small fast-food business and turn it into a super-sized empire. 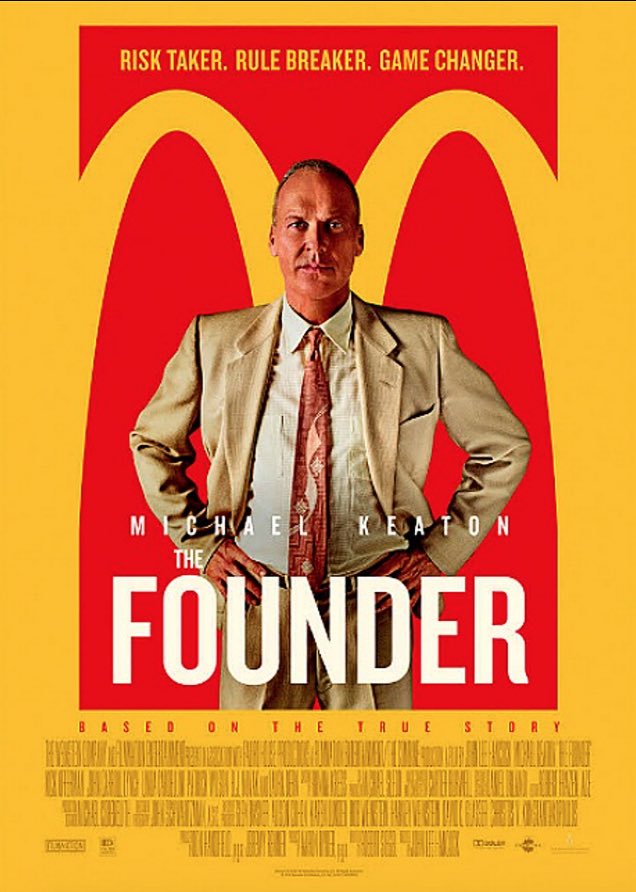 But more generally The Founder is a nuts-and-bolts story about what a scramble it is to grow a business and then stay afloat with all the serpents snapping at your heels.

Robert Siegel‘s script is a portrait of dog-eat-dog entrepenurial capitalism — a movie that basically says “sometimes it takes a pushy, manipulative shithead to orchestrate a big success.”

Except Keaton’s Kroc is not really a shithead. He’s just a hungry, wily go-getter who believes in the organizational basics that made McDonald’s a hit during its early California years (1948 to ’54) and who has the drive and the smarts to build it into a major money-maker. Your heart is basically with the guy, and I was surprised to feel this way after having nursed vaguely unpleasant thoughts about Kroc (scrappy Republican, Nixon and Reagan supporter) my entire life.

You know who is unlikable? Offerman’s Dick McDonald — a guy who’s always complaining, always frowning or bitching about something, always a stopper. The bottom line is that Dick doesn’t get it and neither does Mac, but Ray does. And to my great surprise I found myself taking Ray’s side and even chucking when he tells Dick to go fuck himself in Act Three. Ray is a bit of a prick but not a monster. And I understood where he was coming from. He’s a little shifty here and there, but I couldn’t condemn him all that strongly.

Keaton turns the key in just the right way. He doesn’t try to win you over but he doesn’t play Ray as a bad guy either — he plays it somewhere in between, and it’s that “in between” that makes The Founder feel quietly fascinating. It allows you to root for a not-so-nice-but-at-the-same-time-not-so-bad guy without feeling too conflicted.

And yet The Founder didn’t exactly burn up the box-office. It wound up grossing $12.8 million domestic and $24.1 million worldwide.

Why the lukewarm? Because most people like their moral-ethical dramas to adhere to a black and white scheme, and The Founder refused to go there. It treads a fine ethical edge, allowing you to root for Keaton’s ‘bad guy’, and at the same time allowing you to conclude that the McDonald brothers were stoppers who didn’t get it. And some viewers are uncomfortable with a film that half-endorses a finagling shithead while half-disapproving of the nice, decent guys.

You have to work hard and push the rock uphill and play your cards wisely to stay alive in this world.

Hancock’s film is smart, absorbing, realistic and mild-mannered. Nobody goes nuts or screams or slugs anyone. No car crashes, no fucking, no fart jokes, no temper tantrums, no squealing tires, no belly laughs, no heavyosity. It’s just a straight-dealing, real-life saga of an American success story. Dogged, bare bones, no fooling around.