I’ve been saying from the get-go that the quality of Peter Berg‘s Patriots Day — and the 12.21 platform release is a sign that Berg, star-producer Mark Wahlberg and the producers want it to be received as an exceptional, quality-level thing — will depend in part on how the perpetrators of the 2013 Boston marathon bombing are depicted. 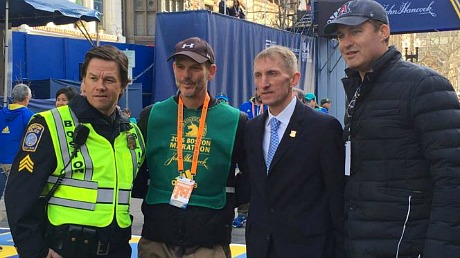 To go by descriptions, Patriots Day sounds like a rah-rah procedural about how the fanatical Tsaranaev brothers were captured through the efforts of a few heroic Bostonians — among them an everyman police sergeant (Mark Wahlberg), Boston police commissioner Ed Davis (John Goodman) and Watertown cop Jeffrey Publiese (J.K. Simmons). But any hack director can make a “hooray for our side!” action drama.

The key to distinction with fact-based action films is realism, exactitude and complexity. Particularly regarding the villains. The best thrillers never reduce baddie-waddies to stick figures. They always dig in.

Paul Greengrass‘s United 93 (’06) showed us the intimate behaviors and occasional POV of the Al Qeada bad guys — it even depicted their religious rituals on the morning of 9/11. Fred Zinneman‘s The Day of the Jackal (’73) fully acquainted us, in a neutral way, with Edward Fox‘s would-be assassin of Charles DeGaulle. Costa Gavras‘s Z showed us the backroom plotting and mentality of the rightwing thugs and military authoritarians behind the killing of Yves Montand‘s liberal politician character.

Will the Patriots Day screenplay (written by Matt Charman, Eric Johnson and Paul Tamasy) portray the Tsaranaev brothers — Dzhokhar (Alex Wolff) and his deceased older brother Tamerlan (Themo Melikidze) — with a bit of dimension, texture and motivation? Or will it make them into terrorist bogeymen, the wily pathan, “the other”?

One hint that Patriots Day may be going for complexity is that Katherine Russell, the wife of Tamerlan Tsaranaev, is being played by Supergirl star Melissa Benoist.

You have to figure that Benoist wouldn’t sign on unless the character is at least somewhat intriguing and/or meaty. (Russell began dating Tsarnaev while attending Suffolk University from 2007 to 2010. She converted to Islam and started wearing a hijab in 2008. She became pregnant with their child and dropped out of Suffolk in her senior year to marry Tsarnaev on 6.21.10.) 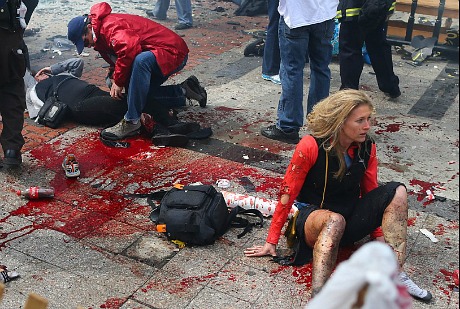 And yet today’s press release about the Patriots Day poster suggests otherwise. Here’s how it reads:

“Directed by acclaimed filmmaker Peter Berg, Patriot’s Day is an account of the 2013 Boston Marathon bombing and the everyday heroes who inspired the world in the extraordinary hours that followed.

“In the aftermath of an unspeakable act of terror, Police Sergeant TOMMY SAUNDERS (Mark Wahlberg) joins courageous survivors, first responders and investigators in a race against the clock to hunt down the bombers before they strike again. Weaving together the stories of Special Agent RICHARD DESLAURIERS (Kevin Bacon), Police Commissioner ED DAVIS (John Goodman), Sergeant JEFFREY PUGLIESE (J.K. Simmons) and nurse CAROL SAUNDERS (Michelle Monaghan), this visceral and unflinching chronicle captures the suspense of the most sophisticated manhunt in law enforcement history and the strength of the people of Boston.”

One presumes that the Tsaranaev brothers and Katherine Russell will be depicted with at least some specificity, but the emphasis on pep-rally homilies in today’s press release is worrisome.

Terms like “everyday heroes” and “the strength of the people of Boston” suggest a large dose of Boston home-town sentiment.

The movie will be the movie. I’m obviously not talking about that. I’m talking about the official description on the movie’s website. I’m talking about an implied message that says “don’t worry, megaplex movie fans — this will be a rah-rah, hot dog-and-mustard Peter Berg movie in the vein of Lone Survivor and Deepwater Horizon — hooray for the good-hearted, flag-saluting servants of our great city…good fellows with wives and cute kids who stood up to adversity and showed what they were made of.”

Obviously I haven’t seen Deepwater Horizon but there are clear indications about what kind of film this will be. The writing was on the wall when J.C. Chandor left the project and Berg was brought in.

As noted, the 12.21 platform release indicates an interest in Patriots Day becoming an awards contender, but the press release (which is taken right from the film’s website) suggests that Patriots Day will be aimed more at blue-collar meatheads than people like me. It says “Peter Berg isn’t going to even try to be Paul Greengrass or Costa-Gavras or Fred Zinneman — he’s going to stick to his basic gut instincts.” 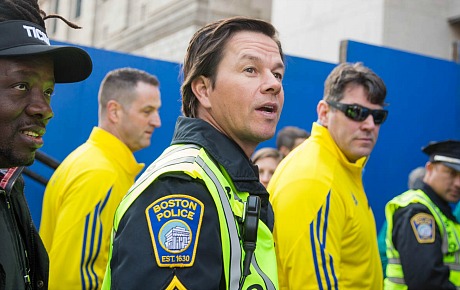 Here’s a link to a grisly morgue photo of Tamerlan Tsaranaev following a shoot-out with Boston authorities.