Congratulations to Kevin Smith and the Clerks II gang for their film having been chosen to show at the Cannes Film Festival as an Official Out-of-Competitioner. It’ll show at midnight towards the end of the festival. (Smith’s p.r. guy Tony Angellotti has told me that Clerks II will have an earlier-in-the-day press screening for poopheads like myself who hate staying up until 2:30 or 3 a.m.) 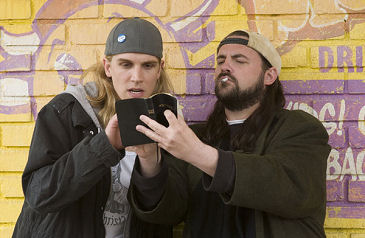 The news came down around May 5th (I don’t know why the Cannes programmers took so long to come to their decision) and the plan was to hold until an official announcement on Monday, 5.15, but the news broke today so here it is. I’m hearing, by the way, that Smith’s film might open in July rather than August. Considering it was going to open on 8.18 opposite Snakes on a Plane, I’d say that’s a smart move. Smith will be in Cannes for the Southland Tales competition screening, an AMFAR benefit that Harvey Weinstein has something to do with, and his own Clerks II debut on 5.26.