Yesterday N.Y. Times critic A.O. Scott posted a tribute piece about the recently departed Roger Moore, titled “Roger Moore Was the Best Bond Because He Was the Gen-X Bond.” The gist was that “the older 007 installments” — the Sean Connery films, he means — “could never match the sublime, ridiculous thrill of seeing The Spy Who Loved Me, Moonraker, For Your Eyes Only and Octopussy on the big screen.

“Those movies were heavenly trash, with plots you didn’t really need to follow and sexual innuendo that struck my young eyes and ears as deliciously risque.”

Moore “exerted himself heroically,” Scott recalls, “grappling with villains atop a moving train, chasing them down ski slopes or into outer space, his unflappable suavity accompanied by an occasional smirk or upward twitch of the eyebrow. He knew exactly how silly these endeavors were, but he was committed to them all the same. He was an ironist and a professional, and as such a pretty good role model for post-’60s preadolescents.”

A nostalgic Gen-X take on the 007 films is fine, but let’s rub the fog off our glasses for a second, okay? Man up and rub that shit off.

There are only two Bond films that ever mattered and ever will matter, and these would be Dr. No (’62) and From Russia With Love (’63). These were the only Bonds that played the game with at least a smidgen of conviction. Yes, they smirked and nudged but they also took the solitary macho-stud assassin thing half-seriously, and they explicitly didn’t embrace the exploitational jizz-whizz approach (i.e., Bond films are about fantasy and made for the Disneyland crowd…why pretend otherwise?”) and were made with relatively lean and mean budgets. These two are the holy grail of the Bond franchise, and still the source of its power and mystique.

The great Sean Connery starred in these two but also in four other Bonds of gradually declining quality — Goldfinger (’64), Thunderball (’65), You Only Live Twice (’67) and Diamonds are Forever (’71). Goldfinger was diverting at times but the other three have become borderline unwatchable. I tried to make it through Diamonds Are Forever a year ago, and I just couldn’t take it. They’re mostly full of shit, these three films. Yes, even Thunderball. They don’t care about anything except flash, self-regard, cheap tricks and wank-offs.

If Scott is saying that the Moore Bonds are better than Thunderball, You Only Live Twice and Diamonds are Forever, he may be right. I certainly wouldn’t argue the point.

But the truth is that the Moore films were always about mainlining helium. They were about selling tickets first, being funny second and delivering decent spy-movie chops third if at all. They were made for gramps and grandma and tykes and teenagers. Look at them more closely and only The Spy Who Loved Me (’77) and For Your Eyes Only (’81) are half-satisfying escape-athons with a sense of flair and self-amusement. Live and Let Die underwhelmed (remember Yaphet Kotto inflating and exploding like a balloon?), and The Man With The Golden Gun even more so. Moonraker brought back Richard Kiel‘s Jaws, but it was silly when it went into space. I don’t even remember anything about Octopussy, but I do remember Chris Walken‘s villain in A View To A Kill.

Connery made six Bond films, and two of them will always be beautiful. Moore made seven Bonds, and while a couple of them were good fun none really and truly had that special nectar. 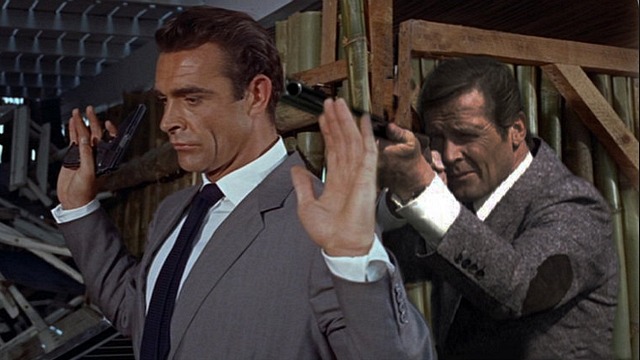