I don’t have a big argument with yesterday’s decision by the Academy to install a merit system into the voting for Best Picture, but I’m asking myself “what’s the upside?” In 2009 the Academy expanded the Best Picture field to ten nominations. Now the Academy is requiring a minimum of 5% of first-place votes in order to receive a Best Picture nomination, which could result in only eight or seven or nine Best Picture finalists. Or five, even. 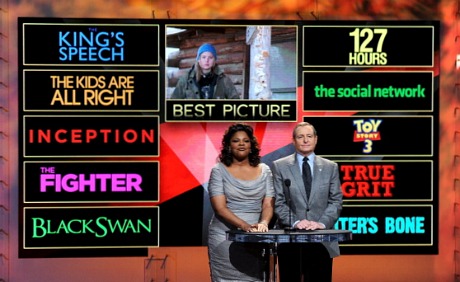 So basically they’re declaring that it’s better to weed out some of the pikers — to focus a little more on discrimination rather than inclusion. This is obviously a conservative backlash to what some on the Academy board felt was an overly liberal policy of nominating ten films for the Best Picture Oscar.

I thought the idea of expanding the field to ten nominations was to pass around a little nomination-love to five soft contenders — i.e., the bottom five. Movies like The Dark Knight that were highly popular with the public but which didn’t fit the mold of a typical Best Picture contender. Or for movies which met some of the criteria (well-crafted story, stirring emotional theme, great performances, “important” subject) but didn’t quite have across-the-board acclaim. Or movies that are highly admired but considered to be worthy on a 7 or 8 or 8.5 level rather than a 9 or 10 level.

All that appears to be out the window now. Now to get a Best Picture nomination you’ll need 5% of Academy voters declaring on their ballot that your film is the absolute best of the year. This means that a lot of very good, perhaps less emotional, perhaps more “art for art’s sake”-type films (which are rarely embraced by the blue-hairs) aren’t going to make the cut.

The new system favors those older Academy members with lazy attitudes who’ve complained over the last two years that they find it hard to come up with ten nominees. Every year I come up with 20 to 25 films that range from excellent to very good to highly respectable.

Deadline‘s Pete Hammond wrote last night that “with the [2009 addition] of 10 nominees, such popular box office hits as Up, The Blind Side, District 9 and Inception earned Best Pic stripes, [but] they likely would not have received if only five films had been eligible.” The new “merit system” pretty much boil things down to a five- or-six- or-seven-nomination finale.