Coogan on the Beach

I had a brief chat yesterday with the great Steve Coogan to talk about his upcoming gig as emcee of the 24th annual Spirit Awards, which will happen per custom under a massive white tent on the beach in Santa Monica on Saturday, 2.21 — one day before the Oscars. 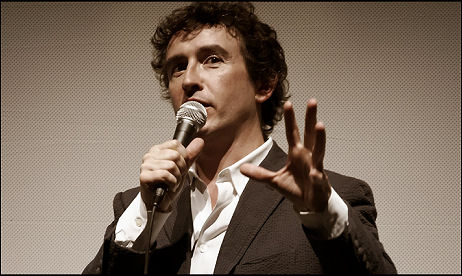 Coogan has been in Los Angeles since 2.10 and is currently working away with some joke-writer friends, refining and fortifying “the act” as it were.

A gifted comedy actor and the current carrier of the Peter Sellers tradition, Coogan delivers a sort of broad quality — a bit giddy and freaky — in his film roles but comes off a lot dryer and more witty-urbane in conversation. Here’s an mp3 link to our little ping-pong match.

“Peter Sellers became ‘Peter Sellers’ because of Stanley Kubrick,” I said at one point. “I think Kubrick understood Sellers better than anyone else, and gave him his greatest roles. And I’m wondering, given the Sellers comparisons, who your Stanley Kubrick is? Or who, given your druthers, would you choose to fill that role?”

I said I thought perhaps Armando Ianucci, who directed Coogan in a brief scene in In The Loop, might be the guy. “He may well be,” Coogan replied. “In The Loop has his exactitude written all over it. He’s great….he never says ‘that’ll do.’ He’s quite purist in that way. I’m more populist than he is, but when we work together a nice sort of blend happens. I’ll be sure and mention the Kubrick analogy when I next see him.”