In a Rachel Abramowitz/L.A. Times interview that ran yesterday, Revolutionary Road director Sam Mendes asserted that April Wheeler, played by Kate Winslet in the film, “is one of the great feminist heroines. She’s the only person in the movie [who’s] big enough to face the truth. 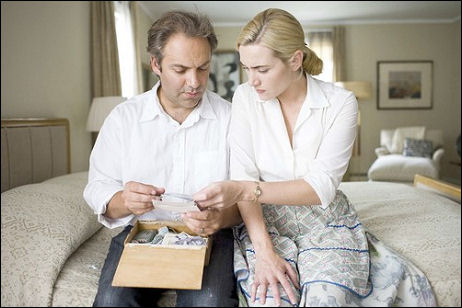 “You know well this is not a movie about a woman who wants to go to Paris,” Mendes says. “It’s a movie about a woman who wants her life back and can still remember the dreams she once had and is finally waking up, which a lot of people do in their 30s and 40s, who go, ‘How did I get here? This is not what I wanted. But I never made the decision, this all happened in increments — I had a child and I had to compromise and I had to do this and that and suddenly I’ve lost my way. Now I’m just like everyone else and I thought I was special.'”

April’s lament is the secret (or not-so-secret) inner story of, I would guess, at least 85% or 90% of the U.S. populace right now. Probably a much smaller percentage back in the conformist ’50s, I’m guessing. I’m also guessing that people of the present are sensing that Revolutionary Road is pushing a certain spiritual reckoning (i.e., the failure to live up to early dreams and ideals) that they’d rather not consider, especially with the continuing economic tremors out there. Hell, the collapse of the temple.

It used to be that people accepted their unexceptional but comfortable middle-classness. But ever since the ’70s (i.e., the Me Decade), the goal of across-the-board self-fulfillment — creative, professional, spiritual, sexual, economic — has been the standard, and very few have measured up.

A lot of people have money and good jobs (or had, I should say), although the general sense of social instability out there is profound right now. (The one bright light is the prospect of gradual betterment offered by Barack Obama.) A decent percentage probably feel they’re at least somewhat sexually satisfied (i.e., looking/hoping/in the game) and have a spiritual life that works for them to some extent.

But most people, I suspect, feel creatively unfulfilled to a large degree. In some cases not at all. And many feel, like April, that the main reason for this is that they caved in to conventional jobs and mass-market comforts too many times in their 20s and early 30s. Most people are probably semi-okay with this, or are telling themselves that they have a reasonably fulfilling life, but they don’t want to be nagged about any failures of spirit.

I have many shortcomings and weaknesses, but I didn’t cop out with a conventional job and go, as Al Pacino‘s detective put it in Heat, for a “regular-type life.” And this may be one reason why Revolutionary Road works for me — why, in fact, I think it’s a near-great film. Because it’s saying what I believe to be the real truth about middle-class conventional values, and about the general sense of diminishment that is always the dividend when you opt for safety above all. For me, “normal” has always been a four-letter word.