The New Daughter, a horror film toplining Kevin Costner, has quietly snuck into L.A. and possibly other markets this past weekend, with no advertising or reviews to speak of. 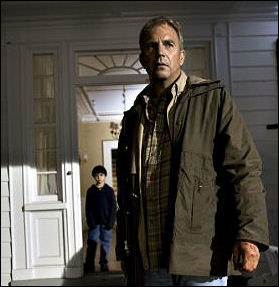 Kevin Costner in The New Daughter

The film is directed by Luis Berdejo, who wrote the acclaimed Spanish horror film [REC] that was remade for America as Quarantine, and it costars Ivana Baquero (Pan’s Labyrinth).

HE reader Marc Edward Heuck, who alerted me, doesn’t claim to “know too much about the plot” but says it’s “something about a widower moving his two kids to a remote place, the daughter of course being a rebellious teen, and then some possession-type stuff ensues, possibly caused by a burial mound on the property.”

Daughter “was made by Gold Circle, and was supposed to be released by New Line, but supposedly they dropped it and Anchor Bay picked it up and are doing this dump release at the Regency Fairfax. It had some advance coverage on horror sites like bloodydisgusting.com, but no advances in the mainstream press.”

Has anyone seen it? Whatever the quality, a sneaky Fairfax Regency opening is clearly a comment on Costner’s ability to open a movie these days.