La Vie en Rose director-writer Olivier Dahan “wrote the script with me in mind. I never knew why, but then he told journalists, ‘There was something about Marion’s eyes.’ He saw some tragedy in my eyes, something terribly sad that reminded him of [Edith] Piaf. 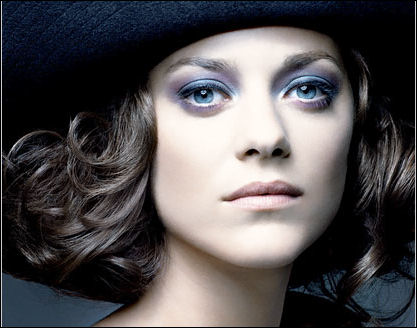 “And I have to say, I did feel close to her. As an actress, I could understand her behavior. That made me less afraid of playing an icon that so many people love.

“In the end, a role this huge is like the biggest present. So your initial fear becomes a fake fear — just a manifestation of your ego. I didn’t want to waste my time asking myself, Will I be good or not good? I realized I just had to have less ego and do more work.” — Marion Cotillard speaking to N.Y. Times questioner Lynn Hirschberg in today’s (10.21) N.Y. Times (a.k.a. “T”) magazine.

The idea in speaking to Hirschberg (and in posing in an assortment of high-style dresses that accompany the q & a) is to re-launch Cotillard’s Best Actress campaign, which began for many journalists like myself six months ago with early screenings, a 4.17 Los Angeles press junket and an appearance by Cotillard and Dahan at the City of Light/City of Angels Film Festival at the DGA theatre.

La Vie en Rose, I wrote on 4.18, “is essential viewing for one reason and one reason only — Cotillard’s bracingly vivid, wholly convincing, almost mind-blowingly hardcore performance as Piaf. 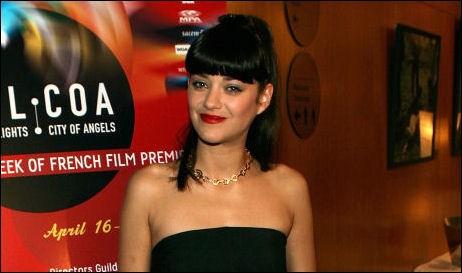 “Cotillard so physically resembles the diminutive Piaf — a frail, sparrow-like woman who stood only 4 foot seven inches — and so burrows inside this legendary singer’s aura of hurt in nearly every stage of her life that she blows you away in almost every scene. I’m making it sound like an overbearing performance but it’s not, trust me.

“Matthew Smith‘s prosthetic makeup is certainly part of the effect, but Cotillard’s performance would be nothing without her capturing Piaf’s spiritual essence (or at least, what I’ve always believed that spiritual essence amounted to) . The result is one of those amazing-transformation, De Niro-as-Jake La Motta performances that automatically gets Oscar attention. 2007 isn’t quite one-third gone, but there’s no way in hell Cotillard won’t be Best Actress-nominated.

“It’s not in the least bit significant that Cotillard is 5′ 6 and 1/2 inches, or nearly a full foot taller than Piaf, since almost no one watching this film is likely to know this or be aware of any height discrepancy anyway. But it is significant that everything she says and does as Piaf is a complete immersion, an exceptional revisiting…an absolute knockout.”