Could American Hustle Be The New Color Purple?

The Dylan Farrow letter “has impacted Cate Blanchett‘s campaign,” Michael Musto tells Gold Derby‘s Tom O’Neil in a recently posted audio discussion. “Blanchett was the biggest lock since Colin Firth when he won for The King’s Speech. [But] suddenly, it’s not cool right now to vote for Woody Allen. Do I think Blanchett will win? I do because her performance is so strong and why would you hold it against her? This has nothing to do with Cate Blanchett, but I think it’s throwing a big wrench into the whole thing. (On Oscar night) if they say the winner is not Cate Blanchett, we’re going to know why she didn’t win.” 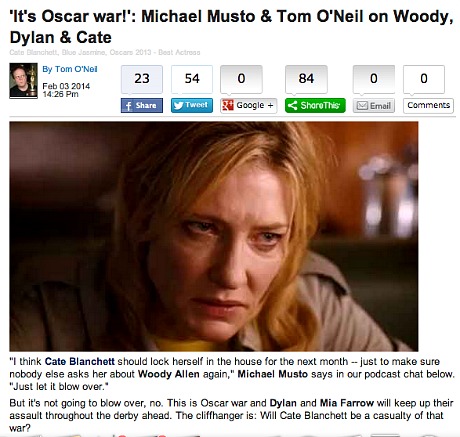 Yesterday’s (2.2) Michael Cieply piece in the N.Y. Times, titled “Ethical Concerns Hit Oscar Races,” wonders if the Dylan Farrow letter will affect Cate Blanchett‘s Oscar odds. (It also mentions the Alone Yet Not Alone Best Song disqualification issue.) “I always think, where the Oscar race is concerned, it’s all fun and games until it hits the N.Y. Times,” a journalist friend said earlier today. “Now, voters really will have to decide whether voting for Blanchett means they are complicit in the endorsement of Allen’s current career.”

February 3, 2014by Jeffrey Wells19 Comments
« Previous post
No Peace For Tom Hardy
Next post »
“Confection…Far From The Truth”