The Envelope‘s Mark Olsen has thrown together a mildly amusing riff on how an award-quality performance can be countered-buzzed or kibboshed by another high-profile performance given by the same actor or actress in the same year that isn’t as widely admired. 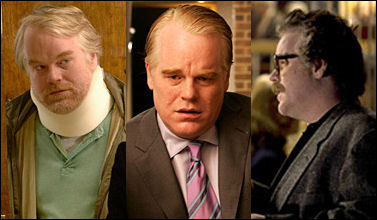 Philip Seymour Hoffman’s performances in The Savages, Before The Devil Knows You’re Dead and Charlie Wilson’s War overlap to some degree, but they don’t (or won’t) tarnish each other in the slightest.

The best-known example of this syndrome, he notes, is the case of those Norbit billboards having killed Eddie Murphy‘s shot at winning the Best Supporting Actor Oscar for his Dreamgirls performance.

Olsen lists 14 possible scenarios that might result in another Murphy-like tumble, but no one in the running for any acting award has a low-rent stinker like Norbit in the wings. Olsen has mainly listed actors and actresses who’ve given two or three strong or distinctive performances in ’07, which may have voters dithering over which was was superior, and in what category the best one belongs. Nice try, but the analogies don’t fly.