Hal Ashby‘s Bound for Glory screened at the Aero last night as part of a “Kevin Thomas‘ favorite movies” series, and an HE correspondent reports that the panel discussion that followed — a confrontational psychodrama between a bizarrely behaved David Caradine, the somewhat more moderate Ronny Cox and dp Haskell Wexler, and an all-but-invisible Thomas — turned into a “near-riot.”

“Carradine, very probably high on something, made some anti-union statements and got into a shouting match with someone in the audience,” he says. “Cox at that point walked out, and that’s before things even got good. Carradine threw a mike toward the audience so a lady questioner could speak, and the mike accidentally hit American Cinematheque publicist Margot Gerber on the head.

“Then Carradine started insulting Wexler’s cinematography, at length. ‘You got an Oscar for ruining my movie,’ Carradine kept telling him. Wexler finally got into it, agreeing that, yes, Hal Ashby had fired him one day, and that he’d responded about the massive amounts of coke being snorted on the set, which got him unfired. Then Carradine denied doing coke with Ashby but defended directors who like their powder — including Quentin Tarantino! [WIth whom Carradine worked on Kill Bill.]

“After some more back-and-forth shouting Carradine broke into a singalong of the title song, with the audience’s nerves too frayed for much of anyone to join in.

Here’s an mp3 containing part of the discussion. If you listen closely you’ll hear Carradine referring to Tarantino as a “coke freak.”

“It was a little like a real-life Who’s Afraid of Virginia Woolf,” the observer says. “It never dawned on me that I could be recording this on my iPhone till nearly the end, but I did get some of it. Someone was taping it for the Cinematheque, and I’d pay a hundred bucks for that video, but I bet it’s already been locked away in a vault somewhere. 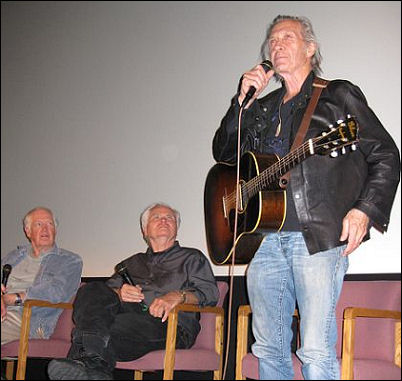 “The best part was good old Kevin, who got in about 10 words during the entire 70 minutes, and who never did a thing to try to stop any of it, which any sane or halfway effectual person would have.

“As somebody said afterward, it was ‘a perfect storm‘, combining combative panelists (and some partially combative audience members) with history’s most passive moderator. The only staffers there seemed to be about 20 years old and unsure whether to try and stop it themselves or not. It was unnerving and thrilling.”

An American Cinematheque rep tells me it was all taped (video and audio) so that’s something to look forward to.