Having now seen the wonderfully vivid and deeply affecting Criterion Collection DVD of Terrence Malick‘s Days of Heaven, it needs to be said that Criterion producer Lee Kline misrepesented the truth of what this DVD contains in a ridiculously over-amped piece that he posted on the Criterion website on 8.16. 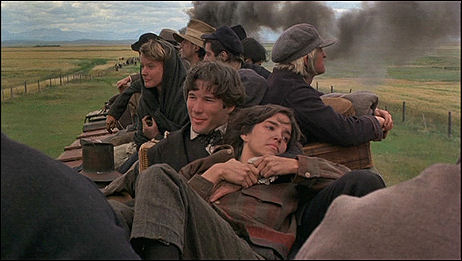 With Malick himself presiding over the final tuning, Kline said the DVD images have been “deliberately unsweetened and “very different” from the previous version because Malick “wanted it to look as natural as possible.” Kline explained that Malick didn’t want the film to look ” too postcard-like” so the watchword during the color correction session was “not too pretty.”

With the “gold and the warmth” taken out, the transfer went “to a really different place” than previous versions,” Kline wrote, and the version that finally emerged was something “beautiful but boy, was it different! I told Terry people were really going to be pretty surprised by this new transfer, since it was such a radical departure from before.”

I saw Days of Heaven in 70 mm on the day it opened — 9.13.78 — at the Cinema 1 on Third Avenue, and the Criterion DVD took me right back to that transporting experience. This is how it looked back then, and should have always looked. And what a sound mix! The rumble of thunder and steam engines is just as strong, but the dialogue is easier to hear than it was way back when. (High-end, multi-channel sound systems in the ’70s were more about delivering “oomph” sounds.) 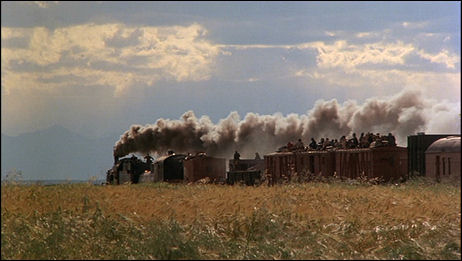 Maybe the version on 1999 Paramount Home Video DVD was a little warmer or richer, fine, but the defining difference between that eight-year-old disc and the Criterion version is clarity, sharpness and a more delicate rendering of the almost eerie natural beauty of Nestor Almendros and Haskell Wexler‘s photography — a feeling of Andrew Wyeth-y purity made all the more breathtaking by the careful application of God’s natural light. Criterion absolutely needs to produce a high-def version.

Kline, no offense, is an idiot for thinking that fans of the film would be “surprised” by this transfer — it’s a God-send — and a serious boob for having written all that hooey on the Criterion blog, which he knew damn well would stir things up. Kline was trying to sell DVDs in the manner of a flim-flam man hawking stuff from the back of a horse-drawn wagon. I will never take anything he writes about a Criterion DVD seriously again.

Go to this DVD Beaver page to see a couple of decent frame-capture comparisons between the old Paramount DVD and the Criterion. Gary Tooze, the site’s hard- to-please critic, calls the Criterion “close to a must-own for film fans. The ground-breaking ‘magic time’ visuals are discussed in detail in the supplements and this adds to the package’s authoritative pluses. Tremendous DVD!” 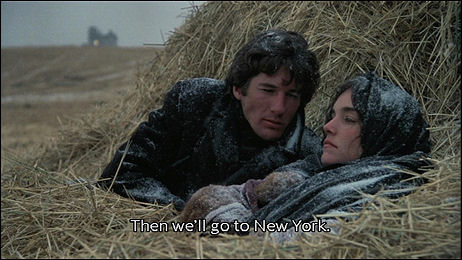