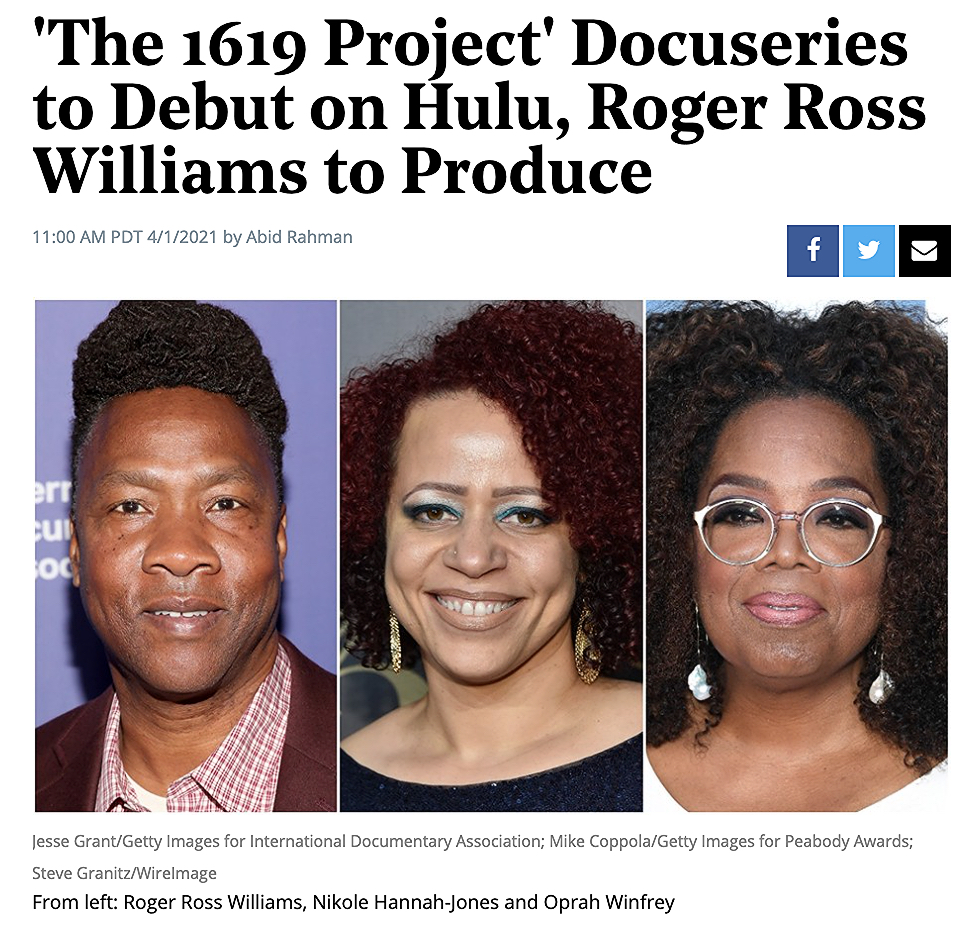 “The 1619 Project is a thesis in search of evidence, not the other way around.

“A conceptual error [in the 1619 Project] reads as follows: “Out of slavery — and the anti-Black racism it required — grew nearly everything that has truly made America exceptional,” writes The New York Times Magazine’s editor, Jake Silverstein.

“Nearly everything? What about, say, the ideas contained by the First Amendment? Or the spirit of openness that brought millions of immigrants through places like Ellis Island? Or the enlightened worldview of the Marshall Plan and the Berlin airlift? Or the spirit of scientific genius and discovery exemplified by the polio vaccine and the moon landing? On the opposite side of the moral ledger, to what extent does anti-Black racism figure in American disgraces such as the brutalization of Native Americans, the Chinese Exclusion Act or the internment of Japanese-Americans in World War II?

“Monocausality — whether it’s the clash of economic classes, the hidden hand of the market, or white supremacy and its consequences — has always been a seductive way of looking at the world. It has always been a simplistic one, too. The world is complex. So are people and their motives. The job of journalism is to take account of that complexity, not simplify it out of existence through the adoption of some ideological orthodoxy.”

Andrew Sullivan, “The N.Y. Times has abandoned liberalism for activism,” posted on 9.13.09:

“The 1619 Project, in its over-reach, ideology masquerading as neutral scholarship…as much activism as journalism.

“And that’s the reason I’m dwelling on this a few weeks later. I’m constantly told that critical race theory is secluded on college campuses, and has no impact outside of them — and yet the newspaper of record, in a dizzyingly short space of time, is now captive to it. Its magazine covers the legacy of slavery not with a variety of scholars, or a diversity of views, but with critical race theory, espoused almost exclusively by black writers, as its sole interpretative mechanism.

“Don’t get me wrong. I think that view deserves to be heard. The idea that the core truth of human society is that it is composed of invisible systems of oppression based on race (sex, gender, etc.), and that liberal democracy is merely a mask to conceal this core truth, and that a liberal society must therefore be dismantled in order to secure racial/social justice is a legitimate worldview. (That view that ‘systems’ determine human history and that the individual is a mere cog in those systems is what makes it neo-Marxist and anti-liberal.)

“But I sure don’t think it deserves to be incarnated as the only way to understand our collective history, let alone be presented as the authoritative truth, in a newspaper people rely on for some gesture toward objectivity.

“The NYT [has chosen] a neo-Marxist rather than liberal path to make a very specific claim: that slavery is not one of many things that describe America’s founding and culture, [but] is the definitive one.”

“To take a stand against the teardown; to insist that, America, for all its flaws, remains a source of hope on Earth; to suggest that our founding date is 1776 and not 1619; was to out yourself as some bigoted troglodyte.

“Will the forces that insist that America is unexceptional control the bounds of discourse and policy in the Biden administration? Or will the White House stand up for the basic tenets of liberalism, like the free exchange of ideas, even — especially — the ones they don’t favor?

“A few months ago I spoke to a Trump administration official who confirmed that the president wouldn’t know what Critical Race Theory was if it smacked him in the face. Nevertheless, in September of 2020, Trump passed an executive order banning training for federal agencies and federal contractors that relies on this ideology.

“Time Magazine was far from alone in spinning Critical Race Theory as ‘an indispensable and widely accepted tool for properly understanding the state of the nation.’

“Critical Race Theory is a threat to the most basic foundations of American life, including, but not limited to, equality under the law. It asks us to define ourselves by our immutable characteristics. It pits us against one another in an endless power struggle. It rejects Enlightenment tools of reason and scientific discovery as tainted. And it undermines our common humanity.” 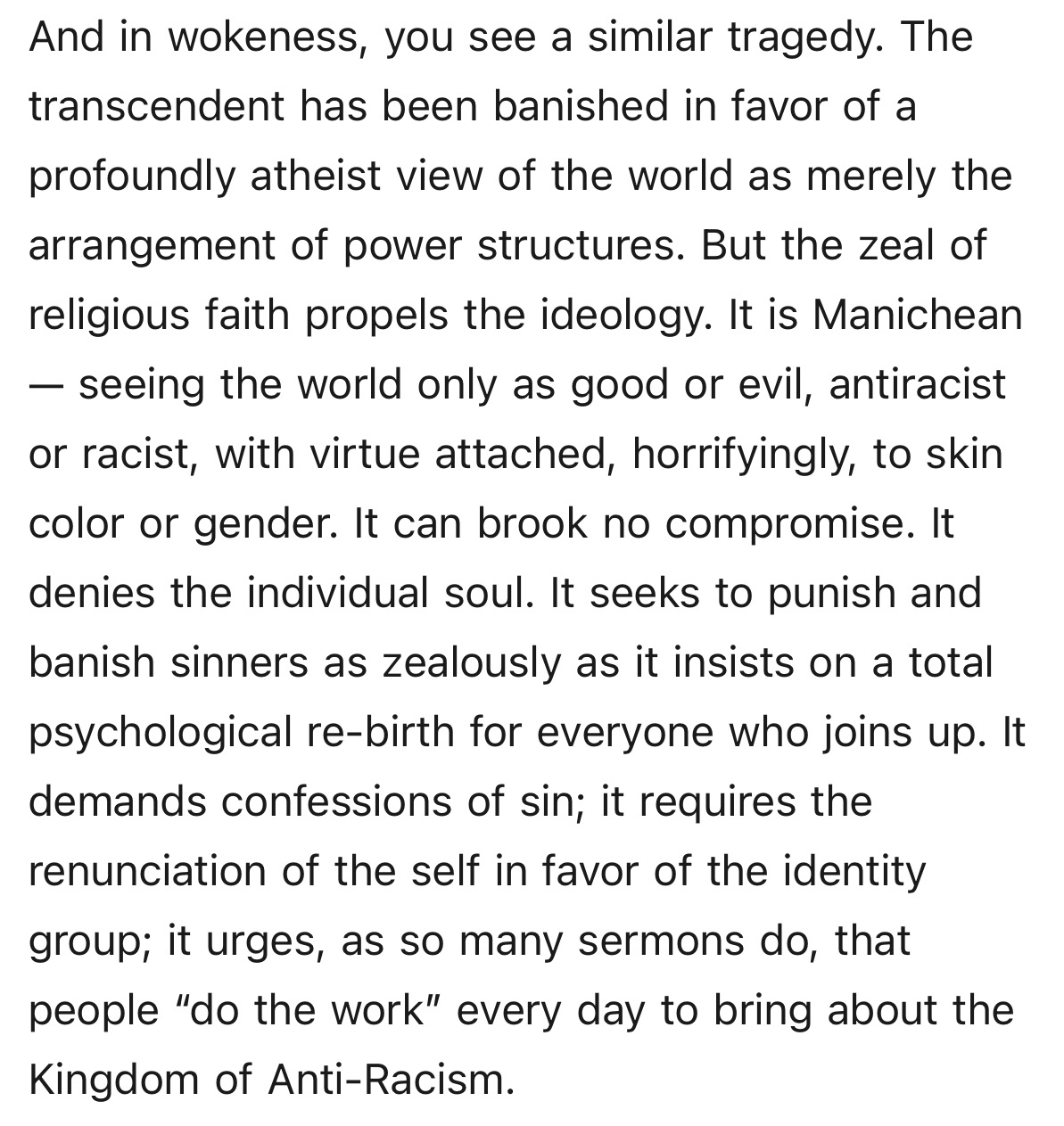