Being There: Crowe & McCarthy

At the end of yesterday’s Other Side of the Wind review I wrote that “it must have been a whole lot of fun to have been part of the shoot back in ’70, ’71 and ’72…hugely enjoyable for those who were there and sharing a magic moment.” I noticed in the closing credits that director Cameron Crowe (Almost Famous, Jerry Maguire) and Hollywood Reporter critic Todd McCarthy played partygoers. I wrote them and asked for recollections — they both responded.

McCarthy: “When I watched it I saw myself for about two seconds in a party scene shot with Cameron Mitchell and another actor I couldn’t identify. Joe McBride, who’s seen the film multiple times, said he saw me in two shots. Maybe when I get a DVD I can freeze-frame to be able to say with certainty how many times I’m onscreen and for how long. But the main thing was just being there.

“I was working as Elaine May‘s assistant on Mikey and Nicky during the day, then in the evenings — on and off for about a month — I would head to Bogdanovich’s house (212 Copa de Oro Road) to be part of Orson’s filmed ‘parties’ while Peter was away shooting Daisy Miller in Italy. 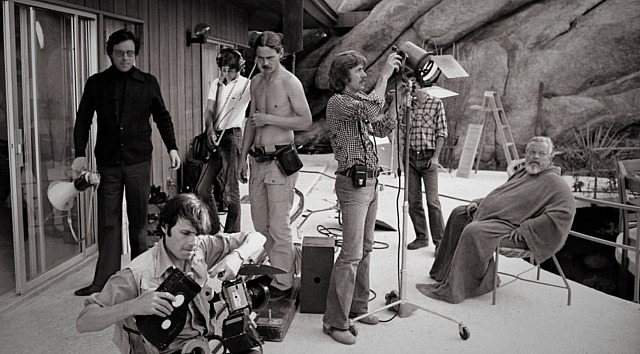 “I was even there for Orson’s 60th birthday” — 5.6.75 — “when he exploded in a rage when everyone paused late in the evening to sing ‘Happy Birthday’ and present him with a cake. He was demanding that they continue working. Sometime after midnight, when there were maybe a dozen people left, he opened the freezer, pulled out a tub of ice cream and proceeded to eat the whole thing.

“But my favorite memory is of something that happened once a week. At 8 pm or 8:30 or whatever time it was, Orson would have a fit, yell at everyone in a fit of dissatisfaction and storm into his bedroom and slam the door behind him. A half-hour or an hour later, he’d come out in a fine humor and resume filming at once. My friend Gary Graver, the cinematographer, later told me what was really going on: Orson’s favorite TV series was Shaft (which aired from late ’73 to early ’74) and throwing this tantrum was his way of getting away to watch it.

“Working with Elaine and Orson, the two biggest mavericks in town, was my introduction to Hollywood.”

Crowe: “I think it was [during] my first trip to Los Angeles when my friend Phil Savenick said, ‘Let’s go be extras in an Orson Welles movie.’ It all felt very mysterious. We weren’t given the name of the film. We hung out all night in the backyard and big living room of a house in Bel-Air — Stone Canyon, I believe — and every thirty minutes or so, Welles would move through the set, look at us, and continue bantering with Peter Bogdanovich. We weren’t sure what was being planned or filmed. At a certain point cameras appeared. Welles appeared with Bogdanovich and shot a scene that took place in the backyard. There were long delays between takes.

“There were about thirty of us, and the best conversation among the extras was ‘If Orson Welles was a musician, who would he be?’ One of the extras argued strongly that he was like Stephen Stills, who wrote ‘For What It’s Worth’ and other classics at a young age. The other extras argued this theory down with relish. We finally decided the closest comparison was Brian Wilson. And right about that time, an assistant director came out and said, ‘Orson is going to bed. Anybody want to come back tomorrow?'”