Terrible hair is rare in feature films, but it happens. Mostly, it must be said, in films from Australia, where mullets have persisted despite every civilized culture dropping them 20 to 25 years ago. Mullets make me see red, in part because red-haired guys often wear them. I only know that if some mullet guy appears….bang, I want him dead. No, that’s raw. If a mullet guy dies I won’t be heartbroken — how about that?

I’m not saying mullets are the downfall of Nash Edgerton and Joel Edgerton‘s The Square (Apparition, 4.9), but they certainly don’t help matters.

Pic is a dirty-doings-in-suburbia thing by way of James M. Cain. A married boyfriend (David Roberts) of a married neighbor (Claire van der Boom) agrees to sub-contract an arsonist to burn her home down so she can steal her husband’s ill-gotten bag of money with no questions asked, and you know the rest. It’s nicely shot, decently cut, well acted, nimble and direct…but with problems.

I was initially intrigued, but then I found it alienating and almost repellent because of (a) the jaw-dropping stupidity propelling most of the key players and (b) the lack of intrigue or promise in same — I didn’t “like” anyone for any reason, no rooting factor, wrote them off, worms in a coffee can.

The basic problem is that The Square is not very well written. The art of writing good thrillers is to make the necessary (in terms of necessary plot turns) seem accidental. But it all seems deliberate in The Square — the Edgerton brothers saying “okay, let’s turn the screws and make things even worse for the perpetrators.” 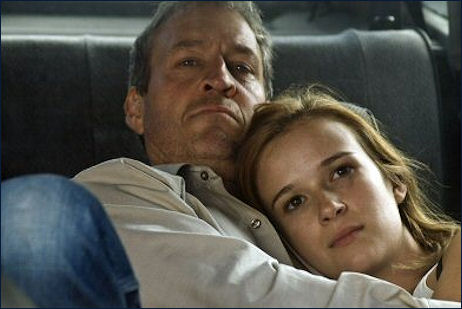 Which, for me, eliminates any sense of real investment in the story. You don’t care what happens to anyone because the Edgertons are playing a game. They’re like a couple of kids torturing small animals.

Roberts may be a normal sort of guy with an aura of fair-minded morality about him, but his coolness and charisma levels are next to zero. What’s with all the gray hair? And those tiny fretful eyes? Roberts looks vulnerable and wimpy from the get-go. He certainly sounds like a sad candy-ass when Lady Macbeth (Van der Boom) begins talking about burnin’ down the house. “Carla, c’mon….Carla, no…this really wouldn’t be right, Carla,” etc. The man is gelatin. I bailed on him right then and there.

Robert has two expressions throughout the entire film — slightly stunned (even after sex in Carla’s car, his face seems to say “what just happened? Whoa…what was that?”) and clueless/concerned/oh-shit. Does he see anything coming at all? Is he stunned or surprised by everything that happens to him in life? Is he trying to prove to worldwide theatrical audiences that he’s the slowest and stupidest film noir anti-hero in the history of the genre?

I understand that noirs usually paint a fatalistic portrait of doomed characters. They’re not stories about heroes and admirable maneuvers and brilliant solutions. But this is a movie, dammit, and if the lead characters (even if you don’t like them much) are going to commit a serious crime you have to at least engage the audience with a notion that the crime might turn out — that the ne’er-do-wells at least have a shot at pulling it off. 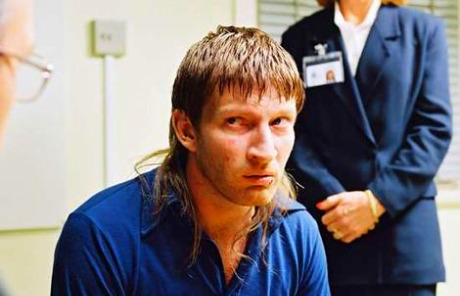 Except you know it’s a doomed enterprise from the get-go when Roberts meets with Joel Edgerton (playing the arsonist) in a cafe with…hello?…Edgerton’s younger sister sitting there. Does Roberts know the sister, or have any reason to trust her or be confident that she won’t blab what she’s overheard to her best friend or whomever? Obviously not. So he’s a total idiot, and the whole thing is ridiculous.

How much money was in Claire’s husband’s gym bag? It couldn’t have been that much….what, $15 or $20 thousand? $30 thousand? Two characters are going to risk everything they have in life for $20 or $30 thousand, which they’ll easily burn through within a year or eighteen months after going on the lam?

And what criminal enterprise was the husband involved in? Why didn’t we get to see what it was, what risks were involved, etc.? And why did she get married to him in the first place? She’s a fairly appealing blonde with good genes, and hubby is a thick-bodied, blue-collared, red-haired “yeah, mate” type with a fucking mullet. What about the old birds-of-a-feather rule? She’s morally reckless, but is obviously better than him.