With the death of Heath Ledger, director Terry Gilliam‘s The Imaginarium of Dr. Parnassus is in a tight spot, to put it mildly. Ledger is/was the star of Gilliam’s fantasy film, which shot exterior scenes in London last month but, according to a Wikipedia summary, has more shooting to do in Vancouver. 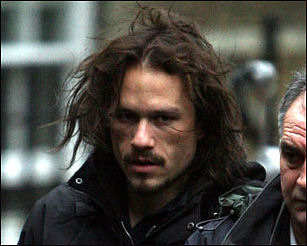 Heath Ledger during last month’s London filming of The Imaginarium of Dr. Parnassus.

Parnassus is set in London, so the Vancouver scenes will presumably be interiors, which usually constitute the bulk of any film unless you’re shooting Lawrence of Arabia. If Ledger’s planned Vancouver interiors aren’t that extensive, maybe Gilliam can fudge some of his unshot scenes with some CG cut and paste work, as Ridley Scott did with the late Oliver Reed‘s footage in Gladiator.
Adam Dawtrey‘s 1.23 Variety piece about this situation says that “blue-screen work [on Parnassus] was due to start in Vancouver next week and continue until early March.” He also wrote that “the producers have yet to issue any statement about how or whether they plan to proceed without Ledger.”
Gilliam is no stranger to massive film-shoot calamity, as anyone who’s seen Keith Fulton and Louis Pepe‘s Lost in La Mancha will tell you. It’s about the awful luck that plagued the shooting of Gilliam’s The Man Who Killed Don Quixote, which led to the whole thing being scrubbed.
Of course, The Imaginarium of Dr. Parnassus was plagued anyway with one of the worst titles in the history of cinema, so Ledger’s death double-fucks it.
Parnassus is operating on a reported budget of $30 million, according to Wikipedia. Production began in December 2007 at London’s Battersea Power Station, Tower Bridge, and St. Paul’s Cathedral.
Gilliam and Adventures of Baron Munchausen collaborator Charles McKeown co-wrote the script for The Imaginarium of Doctor Parnassus. It’s a present-day piece about a thousand-year-old Doctor Parnassus (Christopher Plummer) “leading a traveling theater troupe and offering audience members a chance to go beyond reality through a magical mirror in his possession,” the Wiki summary says.
“Parnassus had been able to guide the imagination of others through a deal with the Devil (Tom Waits), who now comes to collect on the arrangement, targeting the doctor’s daughter (Lily Cole). The troupe, who is joined by a mysterious outsider (Ledger) embark through parallel worlds to rescue the girl.”
Dawtrey’s piece also reports that Ledger had been “working on what would have been his feature directing debut, an adaptation of the Walter Tevis novel ‘The Queen’s Gambit,’ with British writer/producer Allan Scott.
“The leading role of a young female chess prodigy had been offered to Oscar nominee Ellen Page. Ledger, himself a highly rated chess player, was due to play a supporting role.
“In an interview last month, a few days after shooting started on Doctor Parnassus, Gilliam said, ‘Heath is extraordinary. He’s just so good, and he’s going to be a film director. He’s watching everything, and he’s going to be a much better director than I will ever be.'”